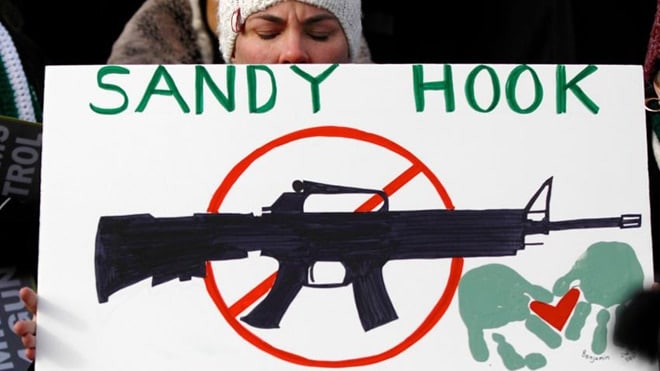 Americans hold signs memorializing the victims of the Sandy Hook massacre as they participate in the March on Washington for Gun Control in Washington, D.C. on Jan. 26, 2013. (Photo: Jonathan Ernst/Reuters)

National and state gun control supporters filed the second wave of requests to Connecticut’s Supreme Court asking if they could submit briefs supporting an appeal by families of Sandy Hook victims in their case against Remington Arms.

The Brady Campaign, the Law Center to Prevent Gun Violence, CT Against Gun Violence, and the Newtown Action Alliance filed requests late last month. They offered to either provide a heightened perspective on issues involved in the case or greater clarity of the laws cited in the appeal.

In their appeal, the families said the gun maker flaunted the combat applications of the AR-15, the civilian version of the military’s standard rifle, in their public marketing efforts before the shooting. They argued Remington targeted a “younger demographic of users” with ads linking the rifle to “macho vigilantism and military-style insurrection,” traits that appealed to the 20-year-old “video-game playing, military-obsessed” gunman.

The court dismissed the case last year saying the Protection of Lawful Commerce in Arms Act provided broad protections for Remington since it was criminal misuse that caused deaths and injuries on that fateful day. In turn, the families want to narrow the court’s concept of negligent entrustment under state and federal law, and renew claims of state trade law violations, according to their brief from February.

Brady, a leader in both challenging pro-gun laws and shaping gun policy, said it would “provide greater analysis of PLCAA and the stakes of affirming the Superior Court’s interpretation of PLCAA.”

The Law Center, a group of legal experts from San Francisco, bolstered the appeal’s interpretation of the Connecticut Unfair Trade Practices Act. The organization said plaintiffs do not need a business relationship with defendants nor do they need to be a direct consumer of their products to argue wrongdoing under CUTPA, a conclusion they found after reviewing similar laws in six other states.

Supporting its belief that military-style weapons are a threat to public safety, CT Against Gun Violence said it “can assist the Supreme Court in resolving the important issues that this appeal presents.”

“The history and military design of the AR-15 are directly relevant to whether the AR-15 presents so high a foreseeable potential for mayhem that public policy should not allow its entry into commerce at any level without extraordinary precautions to ensure the responsibility of any user,” the group said.

The Newtown Action Alliance, which formed after the 2012 school shooting, teamed with the Connecticut Association of Public School Superintendents to raise concerns regarding gun violence, particularly school shootings. They said they have “vital interests in school safety and in society’s response to the shooting at Sandy Hook Elementary School.”

The first wave of requests to file briefs came last month. The court granted the application of an activist church from New York, the Trinity Church, on March 21. Three other groups — including law professors, doctors and the state attorney general — that filed in that first wave are still awaiting approval.

The nine families initially filed their case in December 2014, but Remington’s attorneys quickly pushed the case to federal court where they sought PLCAA protections. However, the plaintiffs successfully had it remanded to state court where the judge tried to keep the case on a schedule, even giving it a trial date, before dismissing in October.

Remington and the other defendants have two months — a deadline of May 1 — to respond to the brief, according to the case docket. Then the plaintiffs get a month to respond again, but the state Supreme Court isn’t expected to take up the case until the fall.