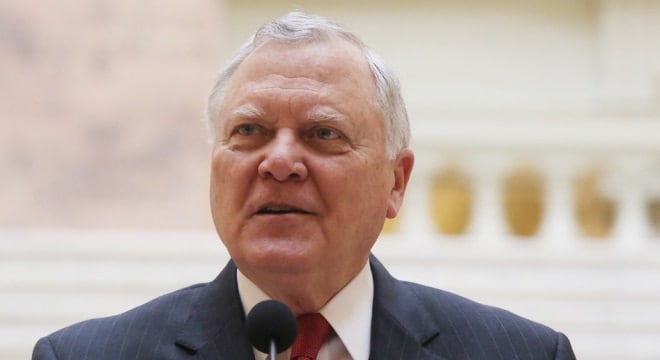 Gov. Nathan Deal has a decision to make on signing or vetoing campus carry legislation for the second time in two years. (Photo: Georgia Governor’s Office)

National gun control groups are calling on Republican Gov. Nathan Deal to double down on rejecting a measure to allow lawful concealed carry on the state’s public colleges and universities.

The proposal, HB 280, was approved by lawmakers on the final day of session last week and forwarded to Deal for review. Gun control advocates hope Deal will see enough things he doesn’t like in the bill to repeat his 2016 veto of a similar measure.

“Some are claiming that this amended version of HB 280 is an acceptable replacement for what the Governor vetoed last year, but that just isn’t true,” said Lindsey Donovan with the Georgia chapter of Moms Demand Action. “Governor Deal’s veto wasn’t asking for minor changes to the places where guns could be carried on campuses. His veto plainly stated what most Georgians know to be true – that guns on campus is a bad and dangerous idea.”

Greg Bluestein of The Atlanta Journal-Constitution says Deal, who is “receptive” to the bill would be more inclined to sign the current measure due to the number of tweaks lawmakers added to allow schools more leeway in keeping some enduring gun-free zones.

The language of the final proposal on Deal’s desk would prohibit people from carrying guns into campus housing including fraternity and sorority houses, athletic events, and campus pre-schools. It would also block off areas used during disciplinary meetings and classes where high school students are in a dual enrollment program.

Gun rights supporters in the state feel the watered-down bill is an incremental increase in Second Amendment rights.

Henry points out that under current law those with a concealed carry license found with a handgun on campus outside of their vehicle face a $1,000 fine and up to a year in jail. Under HB 280, which will see large areas of state institutions opened to carry, those who find themselves ensnared in an enduring gun-free zone will be subject to a misdemeanor with a $25 fine for the first offense.

“We have always said and continue today to say that we will take all we can get and come back for more next year,” said Henry. “This is all we could possibly get and expect it to be signed into law.”

Deal, who is in his final term in office, has 40 days to veto or sign the measure or allow it to simply become law without his signature.