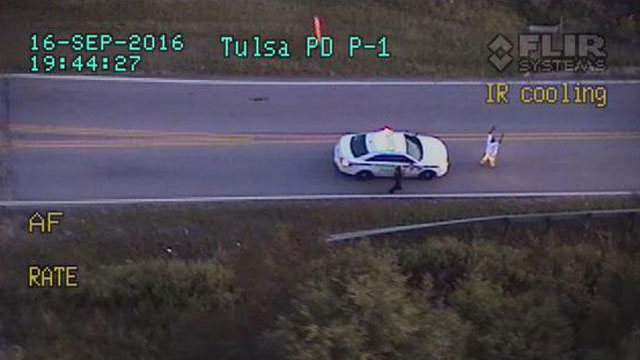 The Tulsa police officer who fatally shot a black man last year said race did not play a factor in her decision to pull the trigger, but rather the man’s own actions and the fear they instilled in her.

Tulsa officer Betty Jo Shelby, who was charged with manslaughter for killing Terence Crutcher, appeared on 60 Minutes on Sunday to explain, among other details, why she thinks the shooting was justified.

Parts of the fatal encounter were captured on both dash cam and video taken from a police helicopter hovering above. At one point in the video, Crutcher clearly had his hands raised in the air, which rekindled the fiery debate over law enforcement and race relations. Shelby is white, while Crutcher was black. But despite the debate, Shelby contends it was not the color of Crutcher’s skin that caused her to react the way she did.

Shelby, who is trained as a Drug Recognition Expert, said in the interview that when she first encountered Crutcher – about 10 minutes before the shooting took place – her first thought was that he appeared to be under the influence of PCP. Shelby described Crutcher as “zombie-like.”

Shelby admitted Crutcher, who stood over six feet and was well over 200 pounds, was not acting belligerent or showing any signs of aggression. However, she also knew the dangers associated with encountering an individual high on PCP – sudden mood swings, anger, violence, hallucinations, and increased, almost super-human like strength.

“What’s goin’ through my mind is what I’ve experienced before. I’ve encountered people putting their hands in their pockets, and I find a loaded gun in their pocket,” Shelby said when asked what she thought as she drew her service pistol.

Noting that Crutcher was showing no signs of aggression, Shelby was asked if she perceived him as more dangerous because he was a large black man.

“No,” Shelby responded. “What I based everything on was his actions, his behaviors. Race had nothing to do with my decision making.”

Shelby said Crutcher finally put his hands up and began walking to his vehicle, while glancing back at Shelby, still, she said, ignoring commands to simply stop.

“I’m thinking he’s calculating how he can get to his vehicle to get whatever weapon it is that he’s going to get because he didn’t find it in his pocket,” Shelby continued.

“I’m feeling that his intent is to do me harm and I keep thinking, ‘Don’t do this. Please don’t do this. Don’t make this happen,'” she added.

Shelby said she shot Crutcher when he appeared to reach into his vehicle and again ignored repeated commands to stop. Shelby described those moments as fast, while at the same time moving in slow motion.

One of the bullets pierced Crutcher’s lung, and he laid on the ground for two minutes before medical aid was administered. Crutcher was pronounced dead at a local hospital a short time later and Shelby’s actions immediately criticized.

Shelby said she “saw a threat” and used the force “necessary to stop a threat.”

When asked why she couldn’t have stopped the perceived threat with less-lethal force such as a shot to the leg or foot, Shelby said they don’t train to shoot in the foot or “be cowboys and to be like what they show on the movies.”

As it turned out, Crutcher did not have a weapon on him nor in his vehicle. Yet, authorities did find PCP in a compartment in the driver’s side door of his SUV and an autopsy later revealed the drug was in his system at the time of the shooting.

Shelby was charged with second-degree manslaughter just days after the fatal encounter, a move which, Shelby said in her opinion, was aimed at keeping civil unrest at bay. Shleby pleaded not guilty to the charges and her trial is set to start in May.

When asked if she has any regrets, Shelby said, “I have sorrow that this happened that this man lost his life but he caused the situation to occur. So in the end, he caused his own.”