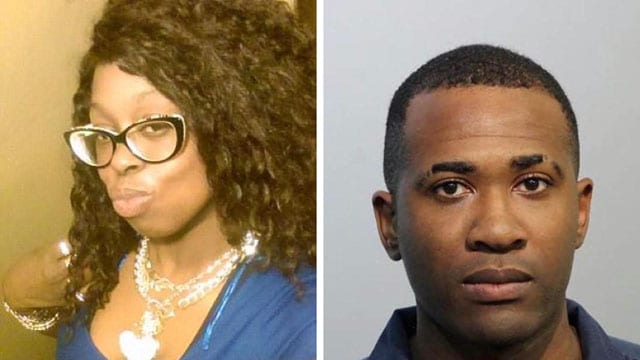 Latina Herring, left, was killed alongside her son (not pictured) after an argument with Allen Cashe on March 27, 2017. (Photo: Facebook, Sanford Police Department)

A man went on a shooting rampage in Sanford, Florida, killing his girlfriend, her 8-year-old son and injuring four others after a domestic dispute boiled over last week.

Officers charged gunman Allen Cashe, 32, with several counts of homicide and attempted homicide connected to Friday morning’s shooting, according to a statement by the Sanford Police Department.

Cashe is accused of killing Latina Herring, 35, and Branden Christian, 8, and attempting to kill Herring’s other son, Brendon, 7, her father, Bertis Gerard Herring, Jr., 61, and two bystanders, Rakeya Jackson, 18, and Lazaro Paredesquelite, 43, as he tried to flee.

According to the police statement, Herring approached officers at a gas station around 3:20 in the morning about a dispute between her and Cashe over house keys. She told them Cashe had her keys and would not return them. Yet, during their conversation, Cashe called 911 to tell authorities that Herring had his car keys and would not return them. The issue resolved when Herring returned the car keys, and then she and Cashe left the gas station separately.

Sanford police released both body camera video and audio of 911 calls regarding the gas station dispute.

About 17 minutes later authorities received a 911 from a third party reporting battery on a woman walking in the area, police said. As officers looked for the woman, they received an additional call saying the assailant had a gun. Using information at hand, officers determined it was Cashe and Herring, whom they found arguing in their front yard about Herring’s keys, which turned out to be inside the house.

Cashe then prepared to leave the house by collecting clothes, police said. But while he attempted to leave, Herring tried to hand him a bag containing more of his belongings. Cashe, however, refused to take the bag and left. Herring then handed the bag to the officers and asked them to hold the items “for safekeeping.” Inside the bag, officers found a Glock 22 with corresponding ammo.

Three hours later, officers patrolling the area heard gunshots coming from the direction of Herring’s house and received a flood of 911 calls about a shooting. They made their way to the home to find her father standing outside, suffering from a gunshot wound and yelling for help.

Inside the house, officers discovered Herring had been shot multiple times. She was pronounced dead at the scene. Her two young sons were critically injured. While searching the area for the suspect, officers found Paredesquelite in a nearby field suffering from a gunshot wound.

The boys and their grandfather were transported for medical treatment. A short time later Jackson showed up at the hospital with a gunshot wound. Jackson was shot while waiting at her school bus stop.

As victims were being brought to the hospital around 6:30 in the morning, officers arrested Cashe as he tried to flee the area. They noticed the car driving erratically pursued it until Cashe jumped out and tried to run away, but was apprehended after a short chase. After searching the vehicle, officers recovered an AK-style rifle that’s connected to the shooting, police said.

Sanford Police Chief Cecil Smith said he’s proud that his officers were able to take Cashe off the streets before he hurt anyone else. “Understanding senseless and violent incidents such as this, is never easy and will often never make sense,” Smith said, adding there were “no words” to describe the scene.