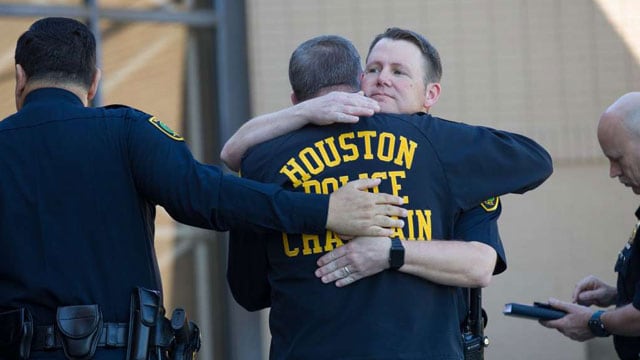 Officers grieve after the discovery of a police officer who appeared to have died from a self-inflicted gunshot wound. (Photo: Godofredo A. Vasquez/Houston Chronicle)

A sergeant with the Houston Police Department was found dead inside the department’s Westside Patrol Station on Friday morning from what appeared to be a self-inflicted gunshot wound.

Houston Police Chief Art Acevedo confirmed in a brief press conference Friday that the officer was a 21-year veteran of the force but, out of respect for the family, did not release the officer’s name. An anonymous source said the officer was 44 years old.

Acevedo said authorities searched the building after the officer failed to report to work at 7 a.m. At 8:35 a.m., the officer’s body was discovered in a fourth-floor stairwell in the patrol station where he was assigned. According to a report from the Houston Chronicle, the fourth floor was previously used to house the jail but was closed due to “structural problems.”

Acevedo said the officer was found with a single gunshot wound to the head and there were no reports of anyone hearing gunshots.

The deceased officer left behind a wife and two children, ages 10 and 12. Acevedo asked for support, respect, and prayers for the family, as well as colleagues and others who were acquainted with the sergeant.

“Anytime anything like this happens, it’s an absolute tragedy,” said Joseph Gamaldi, vice president of the Houston Police Officers Union. “It impacts all of us, whether we knew him or not, because we’re all one big family.”