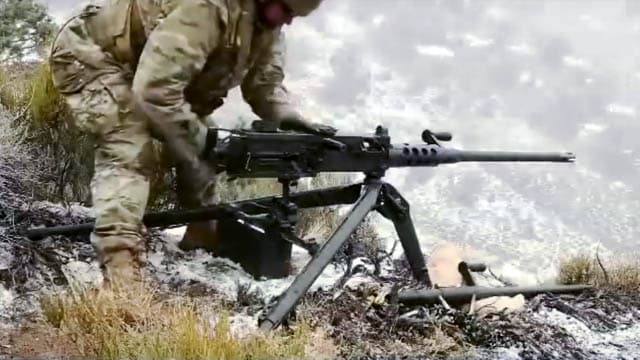 A screen grab from a General Dynamics video for the M2A1 machine gun. (Photo: YouTube)

A General Dynamics subsidiary and U.S. Ordnance will split the order, according to a Department of Defense contract disclosure released last week. The companies will build M2 flexible, M2 fixed, and M2A1 machine guns.

“The original M2 ‘Ma Deuce’ .50 Caliber Machine Gun is a belt-fed, heavy machine gun that mounts on most aircraft and vehicles and can be fired from a tripod,” says a November 2012 report from the U.S. Army. “The system is highly effective against light armored vehicles, low- and slow-flying aircraft, boats and enemy personnel.”

Improving on the M2 design, the M2A1 was developed and eventually named one of the 10 greatest Army inventions in 2011. It weighs 84 pounds and is 67.75 inches long. It can fire up to 600 rounds per minute and has a maximum effective range of 2,000 yards, with a total max range of nearly 7,500 yards.

Bids were solicited for the contract online, and two were received. General Dynamics and U.S. Ordnance are expected to complete the orders by March 30, 2023. U.S. Army Contracting Command will manage the projects.

U.S. Ordnance has won previous contracts with the Army for the M2, including a $28.5 million indefinite delivery/indefinite quantity deal that ended in 2012.