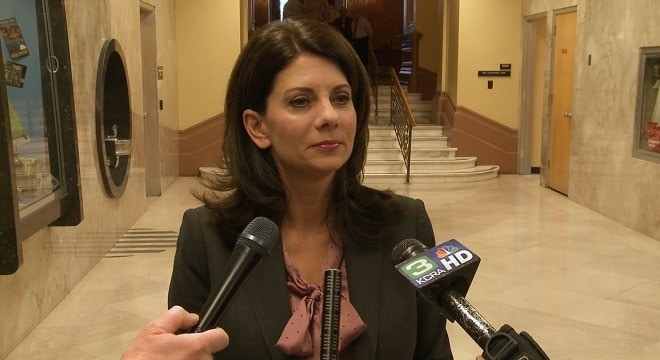 Assemblywoman Melissa Melendez feels, “If a citizen passes the background check and completes the necessary safety training requirements, there should be no reason to deny them a CCW.” (Photo: CA Assembly GOP)

The bill,  AB 757, aimed to amend state law to allow a desire for self-defense to be enough required “good cause” to obtain a permit. It failed 2-5 after a party-line vote.

The measure’s sponsor Assemblywoman Melissa Melendez, a Republican from Lake Elsinore, argued the legislation was needed to reign in some sheriffs and police chiefs who refuse to grant licenses for personal reasons.

“Today the Democrat majority spat in the face of the Constitution by killing this measure,” said Melendez in a statement. “The Constitution guarantees equal protection under the law, yet the current system we have for issuing CCWs in California is anything but equal. Rest assured, this fight for equality isn’t over.”

Melendez’s proposal would have inserted language into the current law so that those applying for a carry permit from their local sheriff or police chief could use a desire for “self-defense, defending the life of another, or preventing crime in which human life is threatened” as sufficient reason to obtain a licence without having to show further good cause.

California is just one of eight states that still practice may-issue permitting for concealed carry licenses and one of just five that ban open carry. A number of lawsuits including Peruta v. San Diego— now pending at the short-staffed U.S. Supreme Court– are underway fighting for shall-issue reform while other litigation including the NRA’s Flanigan v. Harris/Becerra and Nichols v. Brown are pending with the U.S. 9th Circuit on the subject of open carry.