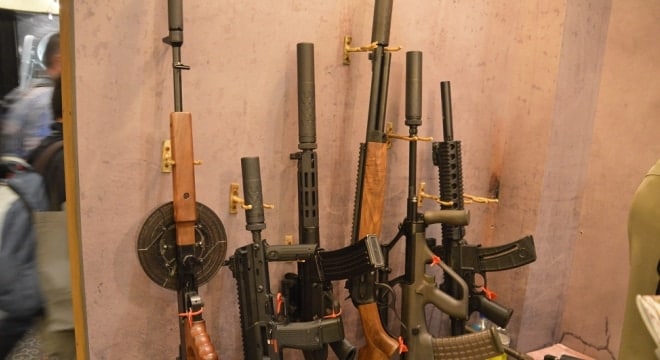 In the end, the gun control groups argue, “The sole purpose to deregulate silencers is to increase the profits of the gun industry at the expense of public safety.” (Photo: Chris Eger/Guns.com)

A pair of national gun control organizations this week released a set of fact sheets addressing concerns they have with potential suppressor deregulation via the Hearing Protection Act.

Americans for Responsible Solutions and the Law Center to Prevent Gun Violence on Tuesday posted “Five Things to Know about the Danger of Silencers” voicing their contention that removing firearm suppressors from the control of the 1934 National Firearms Act and treating them as Title I firearms– which still involve a background check to transfer from a licenced dealer to an eligible possessor– is a pandora’s box of problems.

First on the list is the contention that “Gun silencers are weapons– and when they fall into the wrong hands, they are inherently dangerous devices,” going on to explain they reduce the sound of gunfire and mask muzzle flash making it harder for police to locate an active shooter. However, the group contradicts this statement in a separate fact sheet slamming the use of suppressors as hearing protection by arguing the devices only reduce the sound of gunfire by up to 28 decibels, to the 112-142dB range, which is still well above the 85dB threshold where hearing loss can occur.

Next, the groups argue removing suppressors from the NFA would put “more than 900,000 silencers up for grabs” as the current owners could sell them without a background check which could allow “felons, domestic abusers, and people experiencing a mental health crisis” to obtain them. It should be pointed out that the suppressors currently listed on the National Firearms Registration and Transfer Record would likely still be listed on the record even if the HPA passed into law, and the private sale of any legal suppressor would still have to comply with established federal laws for firearm transfers as well as state mandates– with eight states including New York and California currently prohibiting civilian possession of the devices.

Third on the list of talking points by the advocacy groups is that increased use of suppressors would compromise efforts by 100 cities to use ShotSpotter gunfire detection systems. This was recently noted by The Washington Post to be false with Ralph Clark, the chief executive of ShotSpotter saying, “We have successfully if not inadvertently detected confirmed suppressed gunfire within our existing deployments.”

The group continues by asserting that more suppressors in circulation would translate to a public safety risk, painting a portrait of increased police deaths.

“It’s easy to imagine how suppressed gunfire and muzzle flashes could help criminals elude law enforcement and would raise the risk of ambush attacks targeting cops,” reads the paper, before delivering their fifth point of “If silencers are available to criminals, they’ll use them,” without acknowledging that the instructions to produce improvised suppressors are freely available in the information age.

In the end, the gun control groups argue, “The sole purpose to deregulate silencers is to increase the profits of the gun industry at the expense of public safety.”