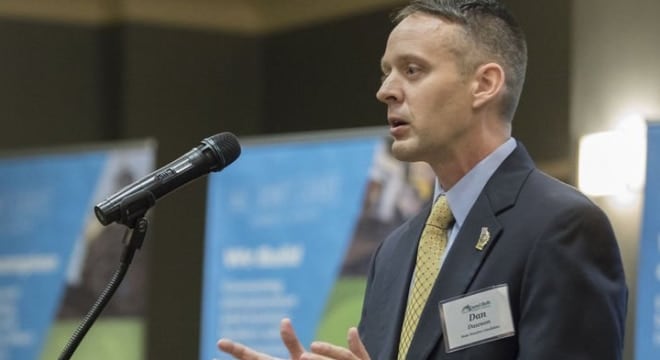 Iowa Sen. Dan Dawson, R-Pottawattamie, the manager for the bill in the Senate, defended the measure’s provisions. (Photo: Dan Dawson)

A pro-gun House bill that includes “stand your ground” provisions was approved by lawmakers in the Iowa Senate on Tuesday.

The measure, HF 517, would strike the duty to retreat from the use of force guidelines in Iowa while bringing a host of other changes to the state’s firearms laws. The Senate made several minor bipartisan changes to the proposal before it passed on a Republican-heavy 33-17 vote, returning it to the House for concurrence.

The stand your ground protections drew the most conversation on the floor with Sen. Dan Dawson, R-Pottawattamie, the manager for the bill in the Senate, defending the move.

“The use of deadly force — or any force for that matter — has to be justified in defense of yourself or another, and the force has to be reasonable. Those two things don’t change here,” Dawson said. “All we are trying to say here in this bill is that you have a right to defend yourself not only in specific areas but any area you have a lawful right to be.”

The advancing measure removes the duty to retreat currently enshrined in Iowa’s self-defense statutes on the use of reasonable or deadly force. This so-called “stand your ground” model has been adopted in many conservative states with Florida passing the first of its kind in 2005.

Next, the legislation would place gun permit holder information out of bounds from public and Freedom of Information Act requests. Currently, anyone can get the name, address and birth date of concealed carry permit holders.

In addition to the use of force and privacy sections of the bill, the proposal also includes mandates to loosen regulations on youth handgun possession for target shooting and hunting reasons provided they are given the firearm by a parent, instructor or guardian. Current laws limit this practice to youth 14 and over.

Finally, the legislation would strike gun free zones at the state capitol, expand Fourth Amendment search and seizure protections for those carrying firearms, strike the state ban on short barreled rifles and shotguns, and prevent officials from restricting the carry of firearms during a state of emergency.

Sen. David Johnson, D-Osceola, ridiculed the proposal on the floor, arguing he supported the measure’s stand your ground provisions when it was a three-page bill, but had misgivings after it ballooned to 22-pages.

“This is not a stand your ground bill on its own,” said Johnson, suggesting each provision in the bill should undergo their own vote.

Another lawmaker, Sen. Kevin Kinney, D-Oxford, proposed an unsuccessful amendment to require those with carry permits to show proficiency in using their firearms rather than rely on the option of internet-based training.

The bill has the support of state and local gun rights organizations while national gun control groups are advocating against it.

House concurrence on the measure without further changes will send the bill to Republican Gov. Terry Branstad, who is expected to sign it.