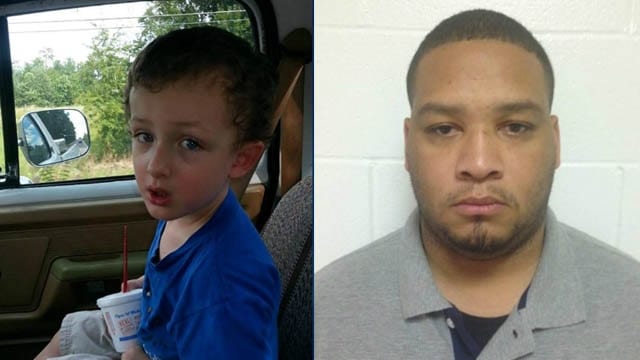 A former officer was sentenced to 40 years in prison on Friday for the shooting death of a 6-year-old autistic boy in Marksville, Louisiana.

Body camera footage played in court showed Few’s hands in the air and out of the window of the vehicle while Stafford and a second deputy officer, Norris Greenhouse Jr., 25, opened fire at Few’s SUV on Nov. 3, 2015 following a two-mile chase.

“He shot 14 times while my hands were in the air,” Few said on Friday while addressing the court. “He just kept shooting.”

The officers fired a total of 18 rounds at Few’s vehicle. Two other officers at the scene didn’t open fire. In early statements, Stafford and Greenhouse told investigators they were trying to serve a warrant on Few, but that turned out not to be true.

In court on Friday, Stafford said he never knew the child was in the car and apologized to Few. “I have kids, man,” he said.

Stafford said he believed Few posed a threat when he backed his car up after the chase, something Judge William J. Bennett alluded to in an eight page statement he read before Friday’s sentencing.

“Apparently Few backed into the Greenhouse vehicle and then pulled forward and away in a perpendicular manner; stopped; then backed up away from the three stationary police cars again at a perpendicular angle,” Bennett said. “While backing up Officer Stafford yelled for Few to put up his hands and while doing so Officer Stafford aimed his handgun at Few and pulled the trigger, shooting fourteen times.”

Bennett said he took Stafford’s criminal background into account while determining his sentence. Stafford had previously been arrested three times — once for marijuana, once for discharge of a firearm, and once for aggravated rape. All of those charges were dismissed. Bennett said he also read letters from Stafford’s friends and family.

“This Court has a firm belief that Derrick Walker Stafford is a good man, family man, good father and good husband,” Bennett said. “Unfortunately, there are times when good people do bad things.”

“This senseless tragedy simply never should have happened,” he said.

In the weeks after the shooting, Few’s fiancée, Megan Dixon, said she’d had a run-in with the other officer involved in the shooting, Norris Greenhouse. According to The Advocate, Dixon and Greenhouse were high school classmates. He messaged her on Facebook and had gone to the home Dixon shared with Few.

“I told Chris (Few) and Chris confronted him about it and told him, ‘Next time you come to my house I’m going to hurt you,’” said Dixon.

Outside the courthouse on Friday, Stafford’s aunt, Bertha Andrews, called the sentencing a “lynching.” Both Stafford and Greenhouse are black. Few is white, as was his son. She said the media demonized her nephew.

“If it had been two white men who killed that little baby, it would’ve been justifiable homicide. If it had been a black baby, it would’ve been justifiable homicide,” Andrews said. Then she pointed to members of the media. “And all of you that prosecuted him, and all of you that has this hatred in your heart, I hope you die, and when you die, you go to hell.”