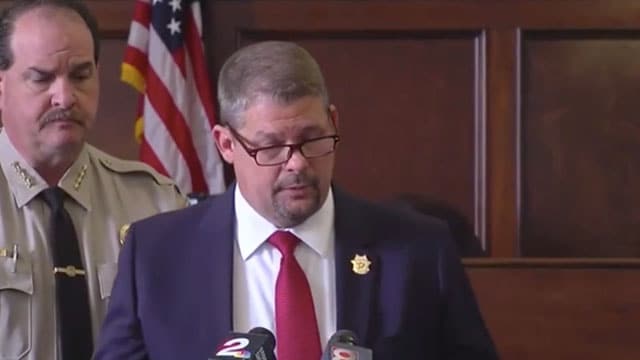 The man who fatally shot three people breaking into his parents’ home acted within the law and will not face any charges, the Wagoner County District Attorney’s office announced Monday.

Wagoner officials — 1st Assistant District Attorney Jack Thorpe and Sheriff Chris Elliott — said the deaths of the three teens were the result of the residential burglary.

Maxwell Cook, 19, Jacob Redfearn, 17, and Jaykob Woodruff, 16, were all pronounced dead at the scene. One was found lying on the driveway, while the other two were found still inside the home. A fourth suspect, Elizabeth Rodriguez, 21, was later arrested and charged with burglary, as well as three counts of felony murder because her accomplices were killed during the commission of a felony.

Rodriguez is accused of being the getaway driver and orchestrating the entire ordeal. Elliott said Rodriguez had “indirect knowledge” about the home and believed there were valuables inside.

During the investigation, authorities also learned that earlier in the day the group of suspects broke into a detached garage on the same property. They stole liquor and electronics from the garage, then returned to the home around noon and kicked in a door to gain access inside. Elliott said the three suspects were all wearing masks, hoodies, and gloves and two of them were armed with weapons – a pair of brass knuckles and a knife.

However, as they forced their way into the home, 23-year-old Zachary Peters, who was home alone at the time of the break-in, heard the commotion, grabbed an AR-15, and opened fire on the intruders. Peters placed a call to 911, and deputies arrived on the scene within four minutes.

Rodriguez, who fled from the scene as shots were fired, showed up at the police station some time later claiming to have knowledge about the deadly break-in. Authorities, having probable cause, soon placed her in custody. Rodriguez remains in the Wagoner County jail without bond. Her initial court appearance is set for Wednesday.

Thorpe stressed that Rodriguez is presumed innocent until proven guilty by either a jury of her peers or a judge.

Elliott noted a recent increase in residential burglaries across the county and several break-ins in the neighborhood where the shooting occurred. It’s unclear if the deceased suspects were responsible for any of those burglaries, but authorities said they do know the suspects were casing out several homes in the area before the deadly break-in.

Elliott said they are “very troubled by this” and don’t want to see it in their county.

He concluded the press conference by saying, ”Life is about choices. Consider your choices very carefully before you act on them, because if you make a poor choice, you could find yourself in a bad situation. And the facts in this case are very solid. These individuals chose to go to this house, they chose to break into this house, they chose to forcibly enter into the house. And because of those decisions, they lost their life.”