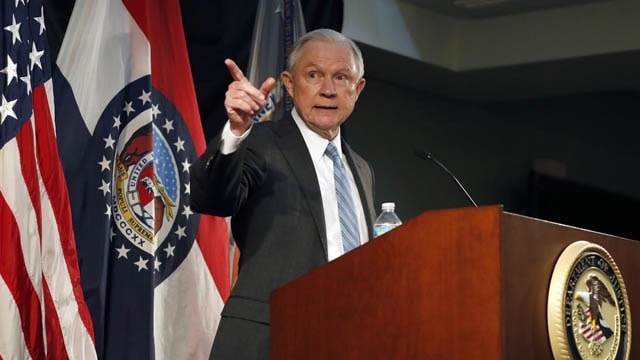 Attorney General Jeff Sessions is putting police reform agreements in cities nationwide under a microscope, in what could be the beginning of a reversal of the Obama era efforts, drawing mixed reactions from community leaders and police.

Sessions issued a memo Friday to department heads and U.S. Attorneys calling for a review of current Department of Justice investigations, including consent decrees issued under the Obama administration.

“It is not the responsibility of the federal government to manage non-federal law enforcement agencies,” the memo says. “The misdeeds of individual bad actors should not impugn or undermine the legitimate and honorable work that law enforcement officers and agencies perform in keeping American communities safe.”

Civil rights leaders are alarmed by Sessions’ memo, worried his efforts will marginalize issues for communities of color.

“Consent decrees are the means by which you provide a hedge of protection, civil rights and civil liberties,” said NAACP President Cornell Brooks, according to the Associated Press. “Why would our attorney general upend and undo that? This review and potential reversal represents a potentially catastrophic, life-or-death consequence for cities where citizens feel like they’re under siege.”

Sessions has long been a critic of the consent decree process, calling them “dangerous” in a 2008 report. “Consent decrees have a profound effect on our legal system as they constitute an end run around the democratic process,” he said in the report.

In January, the outgoing administration agreed to a decree with Baltimore. A hearing to start finalizing that agreement was set for April 6, but on Monday, the Justice Department asked a judge for 90 days to “review and assess” the decree, citing the Trump administration’s shift in priorities, including the president’s promised focus on law and order and the fight against violent crime.

“Pursuant to these recent directives, the United States seeks this extension of time to assess whether and how the provisions of the proposed consent decree interact with the directives of the President and Attorney General,” the Justice Department said in a motion filed Monday.

Baltimore officials — Mayor Catherine Pugh and Police Commissioner Kevin Davis — said at a press conference Monday they want to see the decree implemented, according to WBAL-TV.

“What is inside of that consent decree is absolutely what we need to not only reform the police department, but gain that trust that we need in our communities,” Pugh said.

A day after announcing Baltimore’s decree, then Attorney General Loretta Lynch released a scathing 161-page report outlining patterns of abuse by the Chicago Police Department. Mayor Rahm Emanuel signed an agreement in principle after the investigation, pledging to move forward with the reform process. In a joint statement with Chicago Police Superintendent Eddie Johnson Monday, Emanuel said Sessions’ memo will not stop CPD from implementing reforms.

“We can only speak for our intentions, we can’t speak for the federal government’s. The reforms we have made over the past year are built on the principles of partnership and trust between our residents and our officers,” the mayor’s office said in a statement. “Reform is in our self-interest and that is why Chicago has been, is, and always will be committed to reform.”

In New Orleans, the man appointed to oversee the reforms of that city’s police department said the agreement there still stands. “The court will continue to monitor the implementation of the decree that benefits the citizens of New Orleans and is supported by the city and the police department,” said Jonathan Aronie, the lead monitor for the New Orleans Police Department’s consent decree.

The Justice Department memo comes a week after President Trump met with members of the Fraternal Order of Police, the national police union, members of which are often skeptical of the consent decree process.

“If a consent decree is warranted, a consent decree should be imposed,” said FOP executive director James Pasco. “But in a lot of places, decrees are punitive in nature and do absolutely nothing to improve the climate of the city.”