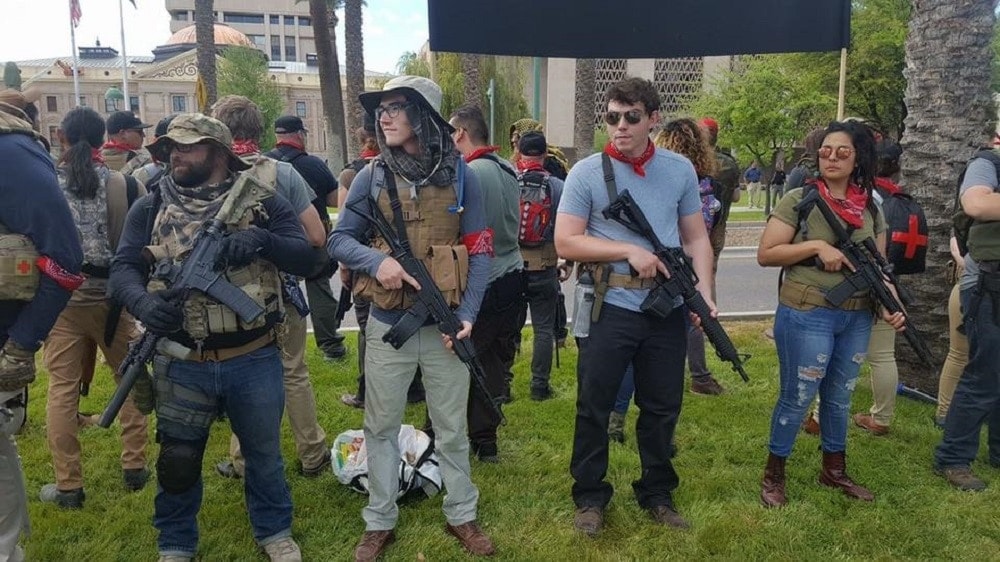 A self-proclaimed anarchist from Arizona and member of the John Brown Gun Club has said guns carried by members at a recent rally were all real.

Reporter Don Lemons of the Phoenix New Times followed up with one of the group’s members, Beth Payne, after he had a heated encounter with the group during their rally in late March. Sure enough, Payne had some fire to spit, including laughing off a claim made by critics that the group’s guns were fake.

“They do make AirSoft guns that look like real guns,” Payne, 35, told Lemons during the interview. “But it seems like a stupid way to get shot by a cop, waving a gun that’s a toy.”

“I just don’t see any strategic or tactical reason to have fake guns at an open-carry [event],” Payne continued. “This is Arizona. It’s not that hard to get a gun.”

Payne informed Lemons that other John Brown Gun Clubs exist in other states as well, all of them operating within a network called Redneck Revolt, which prides itself on “putting the RED back in redneck.” True to the anarchist M.O. or lack thereof, Payne said the groups have no designated leaders.

Payne also noted the group trains weekly with their firearms and that members fall on all different sides of the political spectrum, though the group as a whole leans heavily to the left.

Sporting red bandannas and using communist imagery on some personal websites, the ragtag group may seem like an easy enemy for right-wing militias, but Payne suggested there may be more common ground than first meets the eye. Both sets of groups are unhappy with the government, Payne said, and both do not want their Second Amendment rights taken away.

However, as Lemons noted, great differences still exist, as evidenced by the group’s late March demonstration at the Arizona Capitol in which members showed up armed at a pro-Trump rally. Payne said it was not the group’s first demonstration and it will not be its last.

“I don’t think we’re escalating,” Payne replied when asked if the group was heightening tensions. “We weren’t the first ones to show up armed at a political event. … We’ve had militia showing up at leftists’ events for years.”

However, if fired upon, Payne said she and the rest of the group would not go down without a fight.

“It seems pretty obvious that if someone actually pointed a gun at us and intended to fire on us, we would respond,” she said. “We’re not going to die to prove a point.”