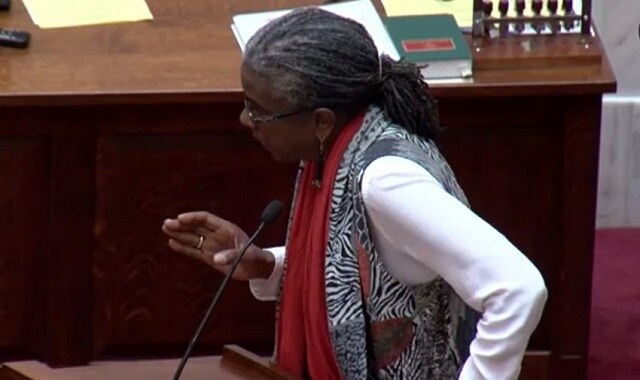 An Arkansas lawmaker added one last cherry to the top of the state’s new gun law drama, claiming that carrying a gun is not a God-given right.

“Where I’m from, the God I serve does not tell me that I have a fundamental right to carry a gun,” state Sen. Stephanie Flowers said last week, as seen in a video posted by Arkansas Matters.

The comments came as a bill was passed that adds restrictions to a new pro-gun law. The bill essentially exempts college sports stadiums, teaching hospitals, and day cares from having to allow guns inside their facilities.

The original bill, signed into law by Gov. Asa Hutchinson last month, greatly expanded where concealed guns could be carried in the state, but came under fire when some realized firearms would be allowed in college football stadiums.

Flowers opened her impassioned speech by talking about her brother who served in Vietnam and her sister who was killed by gun fire.

“By the way,” Flowers said, “I know Afghani veterans, and they don’t all support this bill and these other bills that we’ve been passing here, talking about carrying guns in bars where people are drinking. They don’t believe that. They are peaceable people, loving people.”

“So don’t tell me about no damn everybody got to have a gun,” Flowers continued. “Go to hell with your guns. I’m voting for the damn bill. I don’t want to.”