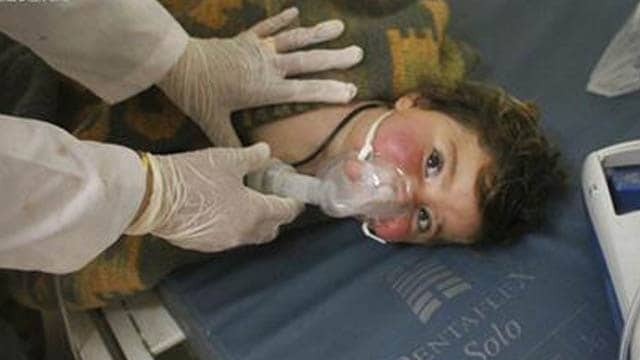 The Turkish government on Thursday confirmed the deadly gas used in an attack that killed dozens of people in Northern Syria on Tuesday was Sarin, an internationally-banned chemical nerve agent that is not only fatal, but causes its victims to slowly suffocate, according to multiple media reports.

The attack happened in Khan Sheikhoun, an area about 50 miles northwest of Hama province, where two other chemical attacks were said to have happened in the last week. Witnesses say clinics working to treat the victims were also targeted by airstrikes.

“Eight patients showed symptoms – including constricted pupils, muscle spasms and involuntary defecation – which are consistent with exposure to a neurotoxic agent such as sarin gas or similar compounds,” read a statement from Medecins Sans Frontieres, a medical charity working in the area.

Russian officials confirmed that the Syrian government carried out an attack in the region, but denied the use of chemical weapons, saying airstrikes hit a weapons depot which produces chemical weapons. An expert called that story “fanciful.”

Tuesday’s attack was the deadliest chemical attack since 2013, when hundreds of people were killed in the Damascus suburb of Ghouta. In the wake of that attack, Assad agreed to a Russian-backed deal to destroy some 1,300 tons of chemical weapons.

In a statement Tuesday, President Donald Trump took a swipe at his predecessor while condemning the attack.

“These heinous actions by the Bashar al-Assad regime are a consequence of the past administration’s weakness and irresolution,” said Trump. “President Obama said in 2012 that he would establish a “red line” against the use of chemical weapons and then did nothing.”

On Wednesday, Trump called the attacks an “affront to humanity.”