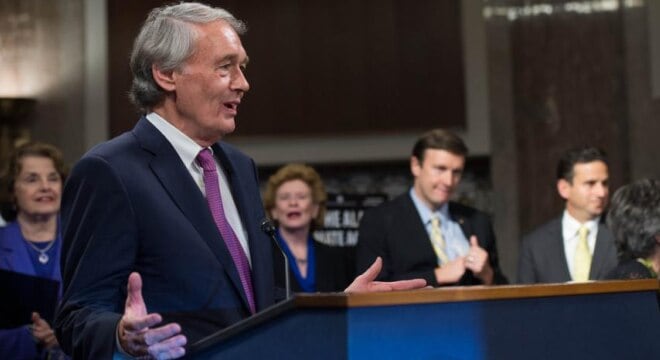 “No one should be afraid of more non-partisan, scientific research into this vital issue – not Republicans, not the NRA and not President Trump,” said Sen. Markey. (Photo: Markey.Senate)

A group of 30 Senate and House Dems debuted a proposal on Tuesday to fund research at the Centers for Disease Control and Prevention on firearms safety and gun violence prevention.

Backed by U.S. Sen. Edward Markey D-Mass., and U.S. Rep. Carolyn Maloney, D-NY, along with a host of other Democrat and Independent lawmakers, the bill, S.834, would provide $10 million per year to CDC for a term of at least six years beginning in 2018.

“Gun violence is ending lives and shattering families in Massachusetts and across our country,” said Markey. “Now more than ever we must study the causes of gun violence and what can be done to prevent it. No one should be afraid of more non-partisan, scientific research into this vital issue – not Republicans, not the NRA and not President Trump.”

The measure introduced this week would set aside $10 million in funding each year for FY2018-2023 to be added to the CDC’s budget, earmarked for research into guns. The money, if approved, would be the largest funding for federal gun use research since a 1996 amendment by then-Rep. Jay Dickey, R-Ark., precluded CDC’s funds from being spent on actions intended to restrict or control the purchase or use of firearms. Dickey, now 77 and long out of office, has since expressed regrets over leading the charge to block funding.

Markey and Maloney supported similar measures in 2014 and 2015 that failed to make it out of committee.

The bill is supported by a number of health care lobby groups and gun control organizations including the Newtown Action Alliance, Everytown, Moms Demand Action, the Brady Campaign, Americans for Responsible Solutions and the Coalition to Stop Gun Violence.

“Gun violence kills more than 90 Americans and injures hundreds more each day, and yet it remains one of the most underfunded areas of public health research,” said Sarah Tofe, research director for Everytown in a statement emailed to Guns.com. “The legislation introduced today would appropriate necessary and long overdue funds to the CDC to reclaim their leadership when it comes to gun violence prevention research – a role that has been decimated for more than two decades thanks to a relentless campaign by gun lobby-backed legislators.”

Gun rights groups contend that the nation’s murder rate and fatal gun accidents have fallen dramatically in recent decades as gun sales have skyrocketed while pointing out the restrictions placed on CDC by Congress are not a blanket ban on firearms research.