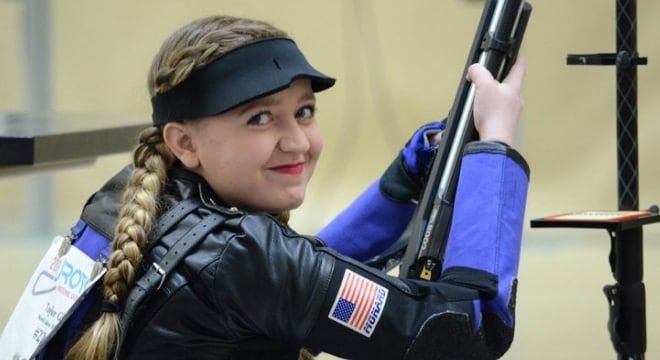 As reported by the Civilian Marksmanship Program, who conduct the annual JROTC National Air Rifle Championship, Gibson shot a 3×20 score of 597-48x. To put that into perspective, out of 20 shots fired from a prone position, 20 shots standing, and 20 shots kneeling, she only had 2-3 shots out of the center “10” ring. This set an Army 3×20 Air (or, 3P Air) National Record and handed her the overall championship for the event in the precision class.

“I came in and thought, I don’t care what I shoot – I’m just going to do the best that I can. And I did the same thing every shot,” Gibson said. “That’s what I kept telling myself, especially in the last few shots of kneeling when I was really thinking, ‘Okay, this is when I really need to get serious, because something could happen here.’”

Gibson had been to the National Championships twice already, picking up a silver medal in both 2015 and 2016. In all, CMP reported that 220 skilled junior sporter and precision class air rifle marksmen from across the nation attended this year’s event.