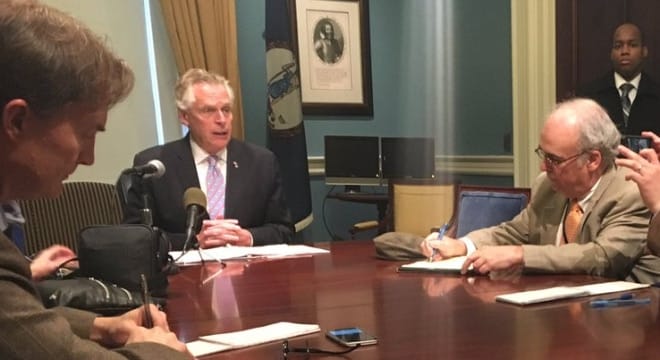 Gov. Terry McAuliffe (D), has vetoed more bills than any governor in Virginia history and lawmakers this week were not able to overturn any. (Photo: GovernorVA)

The reconvened session of the General Assembly on Wednesday upheld all of Gov. Terry McAuliffe’s vetoes but did not adopt his amendment to reinstate Virginia’s one-handgun-a-month law.

McAuliffe, a Democrat, has issued at least 40 vetoes this session and Republican lawmakers, in control of both chambers of the legislature, tried and failed to garner enough votes to override any of them. Among the measures that fell short were four pro-Second Amendment bills — SB 1299, SB 1300, HB 1852, and HB 1853 — that the governor argued would weaken the Commonwealth’s gun laws.

The House measures needed 67 votes to pass and only achieved 65 while the two Senate bills needed 27 and received 22-23. Republicans hold a 66 to 34 majority in the House and 21 seats in the Senate.

In a statement issued Wednesday, McAuliffe was pleased with the news his vetoes were sustained, contending the bills would have been a threat to public safety.

“We blocked bills that would have injected firearms into volatile domestic violence situations, making victims less safe, not more,” said McAuliffe. “Others would have created an unwarranted expansion of persons allowed to carry concealed handguns, including service members considered by the military as unqualified to bear arms to be issued a concealed carry permit.”

“Governor McAuliffe’s veto of this legislation shows a blatant disregard to the lives of domestic violence victims by not allowing them to immediately protect themselves in a situation where a protective order that is just a piece of paper cannot protect them,” noted the National Rifle Association lobbying arm in an alert prior to this week’s session.

One win for lawmakers was rejecting an amendment proposal made by McAuliffe to make it a Class 1 misdemeanor for anyone other than a licensed firearms dealer to purchase more than one handgun within a 30-day period. Those found guilty could face as much as a year in prison and a fine of not more than $2,500.

Virginia had a gun rationing law in effect for two decades, but it was repealed by state lawmakers in 2012 under a bill signed by then-Gov. Robert F. McDonnell, who ran on an election platform that included ending the practice. Both McAuliffe and state Attorney General Mark Herring backed a return to the statute after a gun trafficking ring moving firearms from the Commonwealth to New York was taken down in March.

“The legislature’s ill-advised step to repeal this common-sense policy has made Virginia a go-to state for criminals to purchase weapons in bulk again,” said McAuliffe. “You needn’t look further than the 627-count gun-trafficking indictment earlier this month that included 22 Virginians. One of those suspects even bragged on a police wiretap about how easy it was to acquire guns in Virginia.”

McAuliffe has vetoed more bills than any governor in Virginia history. All 111 have been sustained.