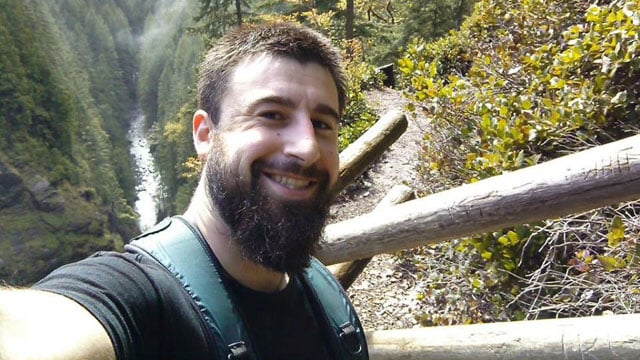 Authorities believe Nathanial Rosa, 31, may have mistaken the building where he was killed for a similar one a few doors down where he had been staying. (Photo: Kristen Drew/KOMO News)

A Belfair, Washington, homeowner was charged with murder Wednesday for fatally shooting an intruder he found taking a shower inside his place of business over the weekend.

The Macon County Sheriff’s Office named the homeowner, who is charged with first-degree murder, as Bruce Fanning, 59. The deceased man was identified as 31-year-old Nathanial Rosa.

According to a press release from the sheriff’s office, the incident unfolded just before 8 a.m. Saturday. Fanning told authorities he went to his place of business, which is located on the same property right next to his residence, and found evidence of forced entry to the building.

However, authorities say Fanning went to his residence, retrieved a handgun, then returned to his place of business where Rosa was still showering. There was no other verbal exchange and Fanning kept silent as he shot Rosa four times.

Fanning then placed a call to 911 stating he had just shot and killed an intruder. Rosa was pronounced dead at the scene and Fanning was taken into police custody.

“To fire three shots through the shower curtain without any warning or challenge or any further communication or contact between the two of them constitutes certainly sufficient time and consideration to justify an allegation of premeditated intent,” explained Mason County Prosecuting Attorney Michael Dorcy.

There is reason to believe that Rosa was simply confused when he entered Fanning’s business. According to reports from KOMO News, Rosa, who was an educator at the Northshore School District with no prior criminal record, had been staying at a friend’s house a few doors down in a building that looks similar to Fanning’s. Rosa, who didn’t have a car, reportedly went out for a walk around 5 a.m. Fanning, who said he did not know the intruder, told investigators he believed Rosa was drunk.