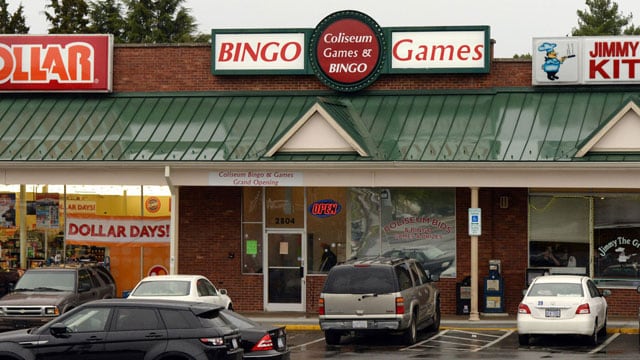 An attempted robbery at a Winston-Salem bingo hall early Wednesday morning ended with an exchange of gunfire, a dead suspect, and an injured employee.

Authorities say two suspects – both armed with handguns – entered the Coliseum Bids and Bingo just after 5 a.m., threatening employees and patrons alike. But before the suspects were able to score any cash or valuables, the 63-year-old manager, who was also armed with a gun, opened fire. The suspects fired back before fleeing on foot.

Police responded to the incident and found one of the suspects about 300 yards from the business. He had been shot and was pronounced dead on the scene. The manager was shot in the shoulder, but his injuries are considered non-life threatening. No one else was injured.

The deceased suspect was identified as 22-year-old Deshaun Rashaud Fisher-McCullum. The second suspect has not been located.

“It’s really a shame that people go to work in the morning and work hard at their jobs, and youth think they can take stuff that doesn’t belong to them. They don’t realize the consequences of their actions,” said Tonya Bess, the owner of a nearby cafe.