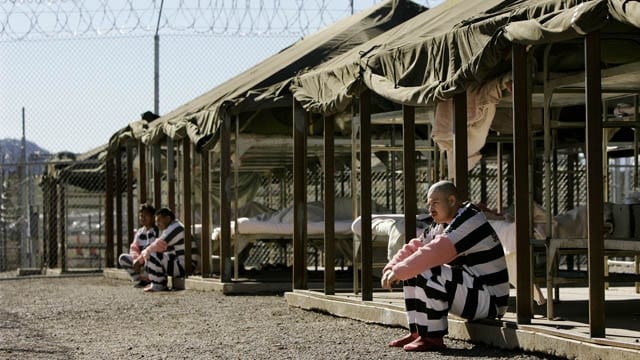 At a press conference Tuesday, the new sheriff in town, Sheriff Paul Penzone, announced the closing of the prison, saying the facility will be shuttered within 60 days.

With an average annual cost of $8.7 million, it had a 2,100 inmate capacity, but only about 800 inmates have been housed there in recent years. Penzone said a methodical review found that Tent City did not deter crime, was not tough on criminals and was not cost efficient.

“That may have been the intent when it was first opened and there was a need,” Penzone said. “But this facility became more of a circus atmosphere for the general public. Starting today, that circus ends, and these tents come down.”

“I can tell you I talked to probably 100 people out there, men and women. They were 100 percent,” Woods said. “If you talk to the detention officers, they will tell you, yeah, those people out there like it. They want to be there.”

In an interview with the Associated Press after Tuesday’s announcement, Arpaio said inmates found the facility to be harsh, but he wasn’t upset that it was being shut down. “I didn’t do it for legacy,” Arpaio said.

“Closing this facility is a good step forward for Maricopa County’s jail system, but there’s still work to do,” said Alessandra Soler, executive director of the American Civil Liberties Union of Arizona. “Maricopa County should use its savings from closing Tent City to improve care for mentally ill detainees, as well as invest in programs and services that treat the root causes of crime.”

Penzone took office on January 1 after beating Arpaio in the November election by a 10 point margin. Arpaio had been the sheriff of Arizona’s most populous county for more than 20 years.