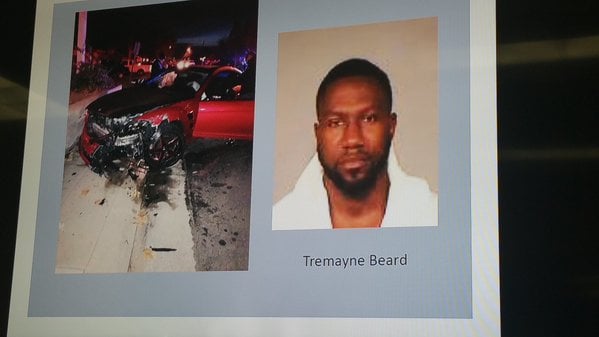 Tremayne Beard crashed his vehicle into another car after leading authorities on a chase that reached speeds in excess of 100 miles per hour. (Photo: KMJ)

A 34-year-old gang member was sentenced to nine years in prison for charges stemming from a 2015 shooting at the Fresno fairgrounds during a birthday party, the Department of Justice announced Monday.

Tremayne Beard pleaded guilty in December 2016 to one count of Felon in Possession of a Firearm.

According to a criminal complaint, Beard, who has multiple prior convictions and is a well-known member of the Dog Pound Gang, was arrested on Dec. 6, 2015, following a high-speed chase and subsequent foot pursuit.

The chase unfolded after officers on patrol near the fairgrounds heard gunshots, then saw Beard leave the area in a vehicle at a high rate of speed while driving in a reckless manner. The high-speed chase came to an end and the foot pursuit began after Beard fish-tailed and crashed his car into another vehicle and a retaining wall.

During the foot pursuit, witnesses saw Beard toss an object while running through a residential yard. Beard was soon thereafter apprehended and police recovered a .45-caliber handgun and ammo in the area where the witness saw Beard drop the object.

Back at the fairgrounds, authorities found several spent .45-caliber shell casings, as well as a bullet hole in a nearby vehicle. Authorities matched the spent casings and the bullet holes to the gun carried by Beard, which was also determined to be stolen.

Due to a recent influx in gang violence and because gang members were known to frequent events sponsored by the promoter who organized the party at the fairgrounds, officers were patrolling the area when the shooting occurred.

“This case highlights how the prosecution of firearms offenses helps to protect the community,” said U.S. Attorney Phillip A. Talbert. “The defendant’s conduct on the night of the offense put several lives in dangers, and I am grateful for the cooperative work among our law enforcement partners to hold him accountable for his crimes.”

Likewise, Fresno Chief of Police Jerry Dyer said, “Removing Tremayne Beard from our community will have a tremendous positive impact on the safety of our neighborhoods.”