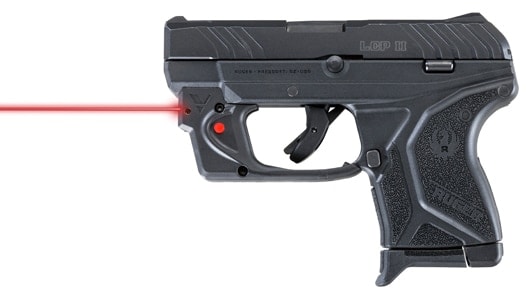 The new package will see the E-series laser by Viridian mounted on the new Ruger LCP II.
(Photo: Viridian)

Viridian and Ruger pair up to outfit Ruger’s LCP II with a pre-installed Viridian red laser, available to consumers later this year.

Offered exclusively through Ruger, the new LCP II will feature a mounted E-Series laser. The E-Series was introduced in 2016 by Viridian specifically for industry partnerships.

The E-Series is trigger guard mounted that touts the maximum intensity red laser allowed by the U.S. The laser sighting system is engineered to fit specific firearm models with an effective range of up to 25 yards in daylight or one mile at night. The laser is factory preset with windage and elevation adjustments and is equipped with an auto shut-off function that shuts down after 5 minutes to preserve battery life. The battery offers over six hours of constant laser use with one 1/3N battery. The E-Series is Southpaw friendly, utilizing an ambidextrous on/off switch.

The laser sighting system will ship on the LCP II, an updated take on the original LCP design. Standing at 3.71-inches tall with an overall length of just over 5-inches, the LCP II chambered in .380 is slightly larger than its predecessor. Featuring a highly textured polymer grip, the hammer-fired design boasts a shorter, crisper trigger and low profile sights.

Shipping with one six-round magazine, the LCP on its own is priced just under $350. No word yet on what price point the Viridian package will offer. The system is expected to drop to consumers sometime in the second quarter of this year.