7 German police pistols you should get to know (VIDEOS) 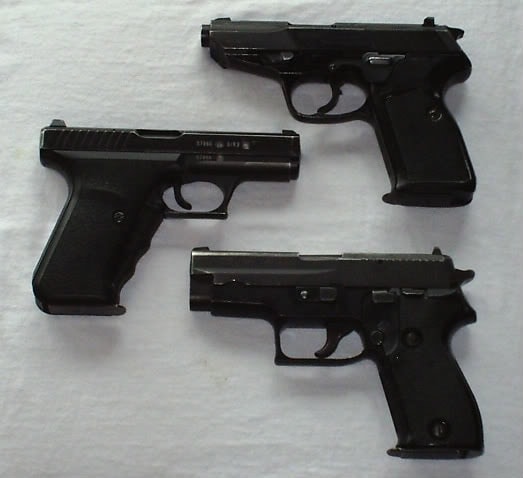 If you’re a handgun hound, chances are you’ve set eyes on a whole line of imported European 9mm cop guns over the years.

You know the ones, the Walther p1, SIG P6, HK P7 etcetera. But what you may not pay much mind to is that all of these guns get their ‘P’ designation from being adopted by the West German police back in the bad old days and, for students of history, that’s more than enough to raise an eyebrow at.

What is the ‘P’ designation about?

At the end of World War 2, Germany was divided into two separate countries.  The US and her allies occupied the Western two thirds of the country, which became the Federal Republic of Germany, commonly referred to as West Germany. The Soviets occupied the easternmost portion of the land, and formed the German Democratic Republic, or East Germany.

In 1950, the new Republic of Germany needed guns for their police forces and went about setting a standard for these guns to be acceptable for service. As such, each of the guns that passed the testing was classified with a P-designation.

Because of these standards these pistols, stretching from the Walther P-1 to the HK P-10, have shared a number of common attributes…

What these guns had in common 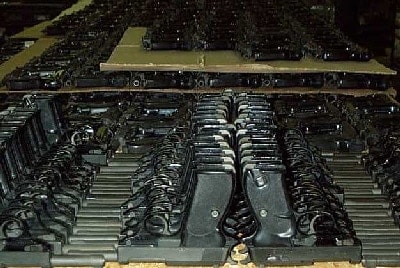 Over the past few decades, thousands of these guns have been imported into the US. As such, they are a common sight on the aftermarket.

Each of the states in Germany has its own police force known as the Landespolizei (State Police) and they, along with the Federal Police and municipal police forces are allowed to select any of the approved ‘P’ guns to arm their officers.

These guns were all large caliber, the same 9x19mm Parabellum that the German Army had used in both World Wars in their Walther P-38, Luger 08, and Mauser C96 pistols. This was an upgrade from the police-standard .32ACP and .380ACP chambering used prior. All of these guns are double-action, leaving behind legacy designs such as the Browning Hi-Power.

Although German police had often used small-framed compact guns such as the Walther PP, these new ‘P’ series weapons were all arguably 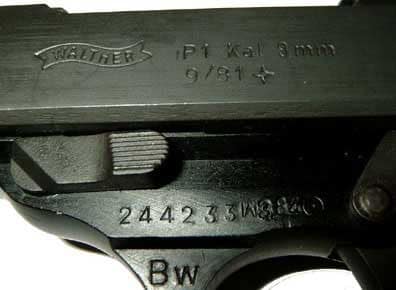 Most of these guns will have the four digit manufacture date as well as the ‘P’ designation as seen on this P1.

full-sized semi-autos. German cops, like most in the US, have long had the responsibility of being directly issued their guns and as such are expected to carry them while off duty. With the possibility of World War 3 only a few seconds away, it was considered useful to issue combat-capable pistols.

Taking their World War 2 model P-38, Fritz Walther gave it an alloy rather than steel frame to speed production and lighten the load of the classic German 9 milly. Manurhin in France made this gun for a while under contract since the old Walther factory had been in what was then Eastern Germany and the Soviets were the new leaseholders. Fritz built a new workshop in Ulm/Donau and started making these P-1 marked Walthers for the West German military and police in 1956, continuing to do so for more than 25 years. 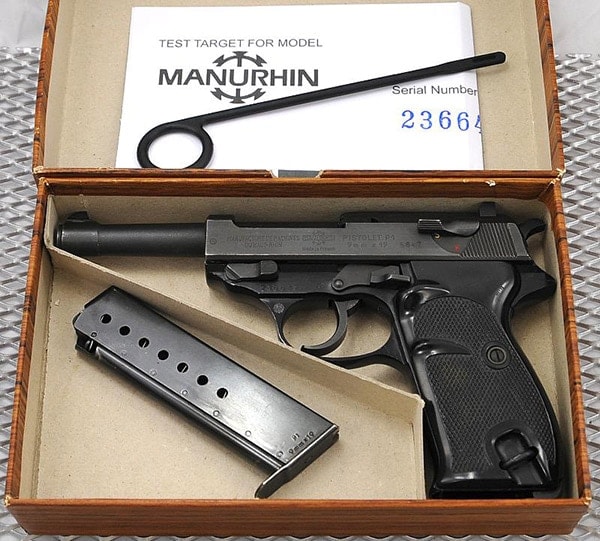 Manurhin made French P1 for the German police (O the irony..).

These guns are dead ringers for WWII P-38s and many parts interchange, especially the single-stack 8-shot magazine. They will be marked ‘P-1’ and have a four digit production date on their frame. The date is simple to figure out, with 01/76 being January 1976.

The P-1 is a good design and is some 4-ounces lighter than the original P-38 but is nowhere near as collectable, typically going for about $300 on the surplus market in the US so be sure not to confuse one for the other. Be careful shooing +P rounds from these guns due to their alloy frames also. 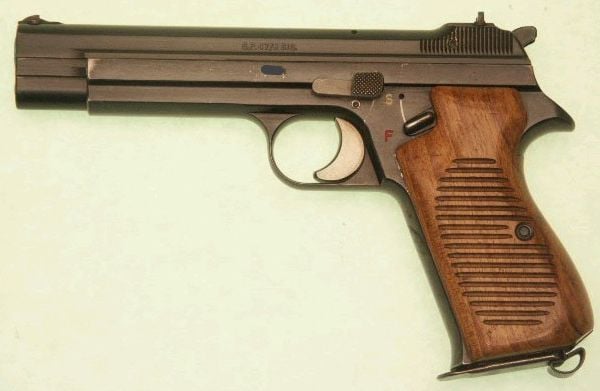 Swiss Army Pistole 49, at one time the finest 9mm single stack on the Continent.

Germany sits on top of Switzerland geographically. This neighboring country had perhaps the best 9mm of the 1950s, the SIG made P210, as their standard Army pistol. This sleek classic had all the styling of an art deco V12 powered sports car of the same era coupled with the precision of a fine Swiss watch. 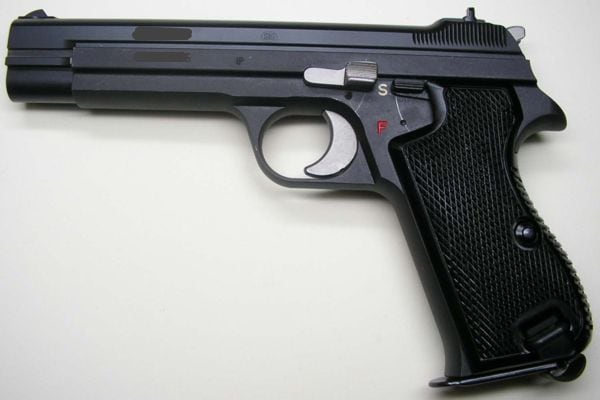 They had an 8.5-inch overall length and 4.7-inch barrel in a 31-ounce, 8-shot, short-recoil operated pistol. Unable to wait for the French made Walther-Manuhurn guns, the West German Bundesgrenzschutz (Border Police) ordered 5,000 P210-4s from Switzerland in 1951. These guns were the same standard as the Swiss Army’s hoglegs, but lacked a lanyard ring. The chance of finding a ‘P-2’ marked SIG in the US is as rare as getting your buddy Jeff to pick up a check.  As such these guns fetch a couple grand when encountered. 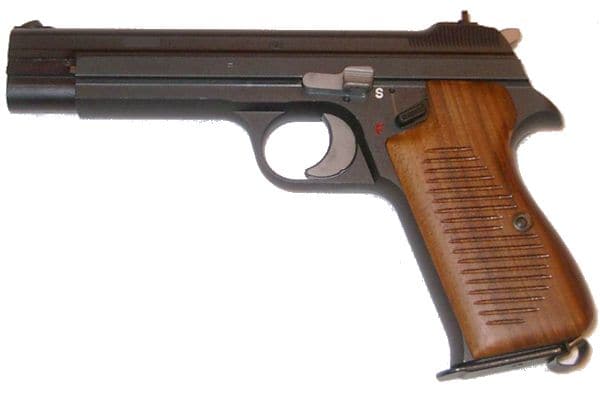 SIG P210-4, made for West German BundesGrentzSchutz (Border Guard). Note the lack of a lanyard ring on the grip. 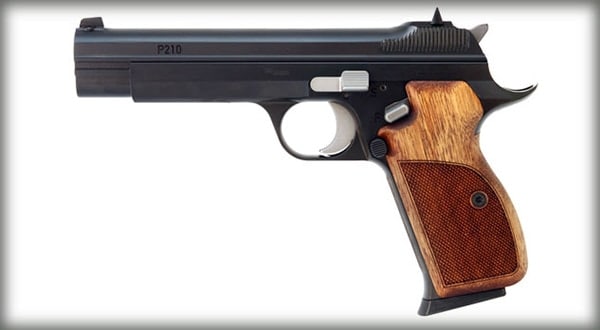 Hitler needed lots of guns to wage a two front war (three fronts if you count North Africa/Italy). This meant that his purchasing agents walked the earth like Cain in Kung Fu looking for deals on decent firearms of all sorts. 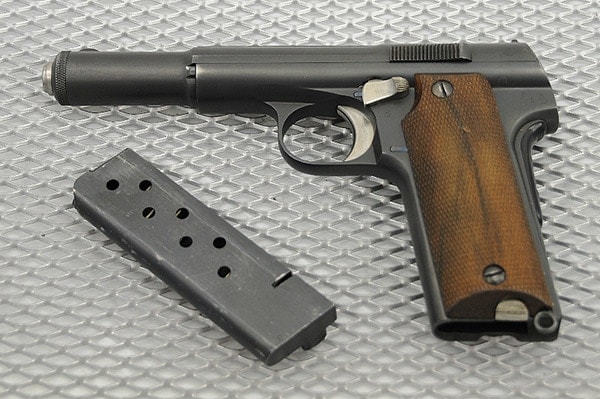 One deal they brokered was with the Spanish firm of Astra for nearly 60,000 of their Model 600 pistols. The 600 was a 9x19mm version of the Spanish Army’s Astra 400, which was chambered in 9x23mm Largo. At 8.1-inches overall with a very distinctive 5.3-inch barrel, the 600 was a chunky gun, tipping the scales at over 40-ounces when its 8-shot magazine was fully loaded. A blowback design (think Hi-Point 9mm), it had a stout recoil but its long barrel gave it a good sight radius and it proved reliable enough to be well liked by the German Army during the war. Hey, anything is better than a pointy stick.

After the War, the Spanish still had more than 10,000 of these guns in storage that could never be delivered to Hitler. In the 1950s, smelling a deal, West Germany negotiated the long delayed delivery of these dusty guns from storage, redubbed the P3 police pistol. They served notably with the West Berlin Police. Guns marked as such are seen in the US for $900-ish.

In 1975, the writing was on the wall for the German police to start replacing the Walther P1, then largely the standard 9mm pistol on the hips of poliezi across the country, with something more modern. Walther was working on a revolutionary new design, which later became the P88 series of gun, but it was still in R&D. To have something with more of a wow-factor than the old P1, Walther came up with the P-38 IV. 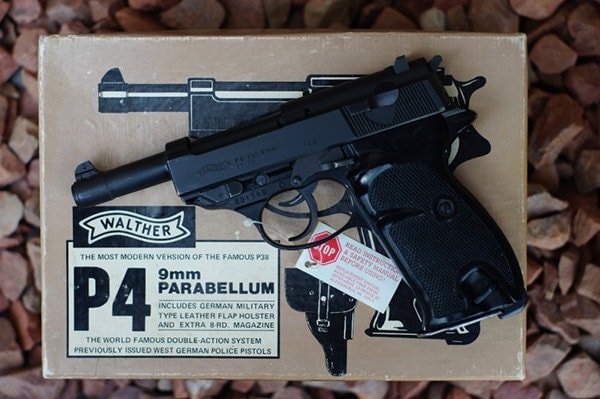 This gun, adopted as the P4 by the West German police, took the P1 and shortened the barrel by a half inch, then converted the safety to a simple decocker. These guns also had a redesigned slide that incorporated lessons learned from 40 years of P-38 production and is seen as the ‘ultimate’ version of that venerable gun.

Only produced for six years, this 8-shot 9mm takes the same P-38/P-1 magazines and many of the lower internal parts as its near relatives with the added potential of being extremely collectable. Commercial models, marked P-38 IV and with brown wooden grips fetch as much as $1000 while police trade ins with the ‘P-4’ marking and four digit born-on dates go for about half that. 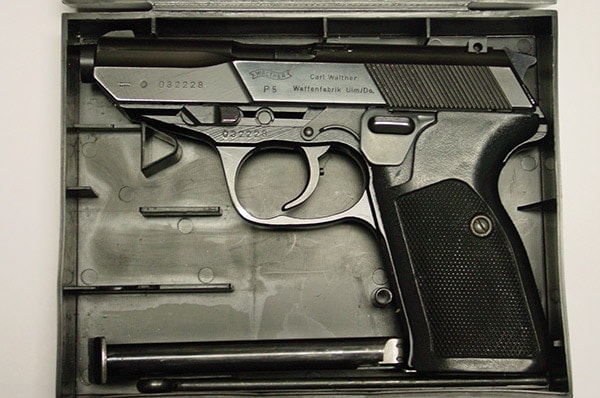 Chopping the barrel of the P4 down even further, in 1977 Walther introduced the gun that would be classified as the P-5 by the German police. The lower frame and action of this gun mimics the P-38/P-1/P-4 (hey if it aint broke…) while the upper slide and barrel looked like it came from the Walther PPK—only in 9mm. The P5 wasn’t very popular when compared to the SIG-Sauer P6. 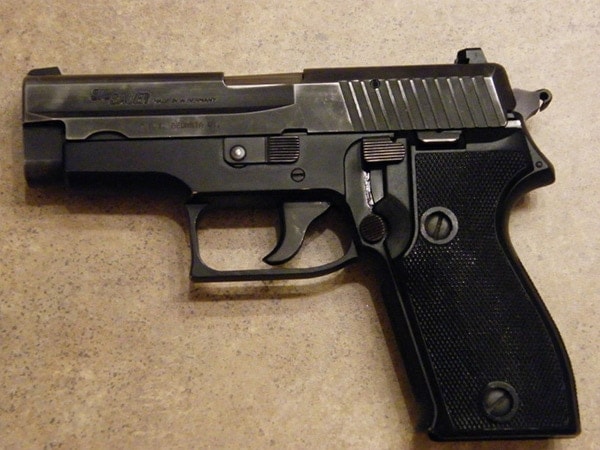 Switzerland’s SIG works had previously sold the Germans a small number of guns (see the P2 above) but was trolling for a bigger fish. Introducing their new P225 pistol to replace stocks of Walther P1s in 1975, the company collaborated with J. P. Sauer & Sohn, a local German company, to make a bid. This led to the beautiful relationship that became SIG-Sauer while the gun this union created was adopted as the P6.

Some 40,000 of these handguns were made at Sauer’s factory in Eckenförde, Germany, making it one of the most popular Teutonic police pistols of the 1980s. In short, it was cheaper than the P5 and P7, and better than the P3 and P4. The single-stack 8-shot (hear that anywhere else) 9mm was double-action/single-action with a safety-decock that any modern SIG owner will fast recognize.

Commercial guns, also made in Eckenförde for export, sold for very high amounts in the US while police trade ins made it over here a few years ago for as low as $229 before immediately doubling in price. You can tell commercial models from cop guns by the ‘P6’ marking, four-digit born-on date, and funky little Deformationssporn hooked hammer. 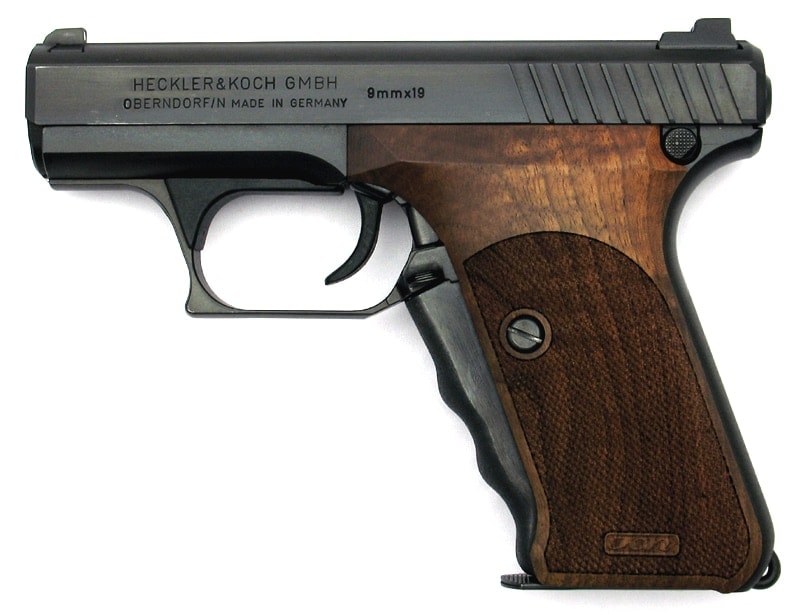 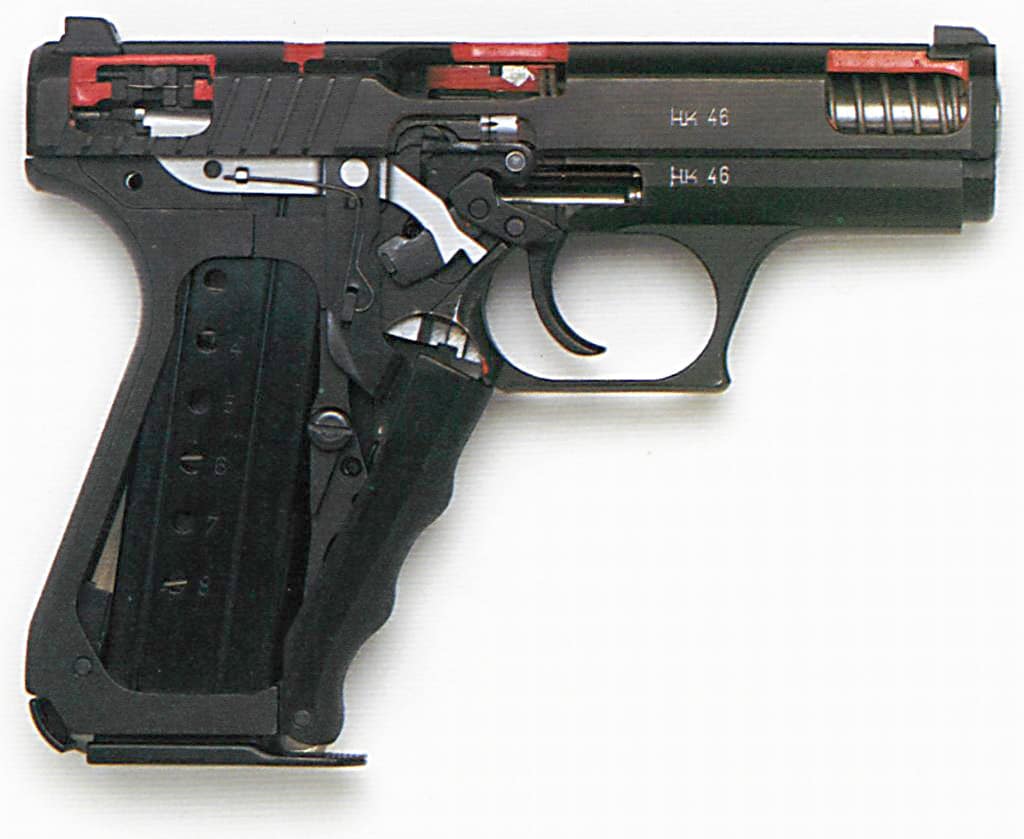 Billed in the United States as the most expensive handgun on the market (we aren’t kidding), the up and coming West German company of Heckler and Koch introduced their small squeeze-cocking 9mm combat pistol in 1979. This semi-automatic gas-delayed blowback pistol used several innovative features to propel itself into gun legend. The thing is, cops in every country have a budget, even German ones, and the P7, while super neat, was only bought in small numbers.

These guns have been out of production in Germany for a few years and commercial models are about all that can be found in the US—still highly priced. It was the cost of these guns that led HK to move to a more economical polymer framed gun, that we know in the states as the USP.

The German police and military just call it the P8. 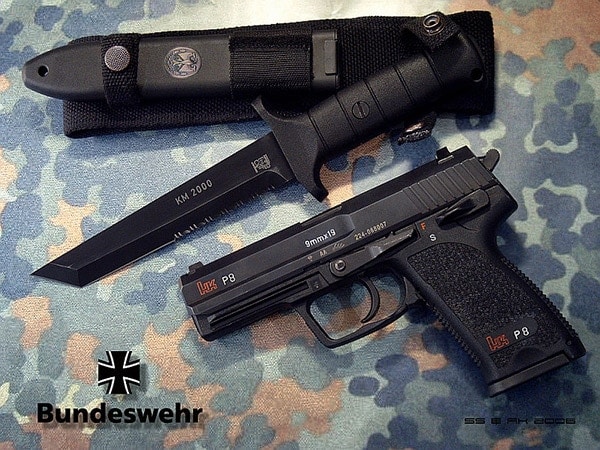 We give you the P8. Look familiar?