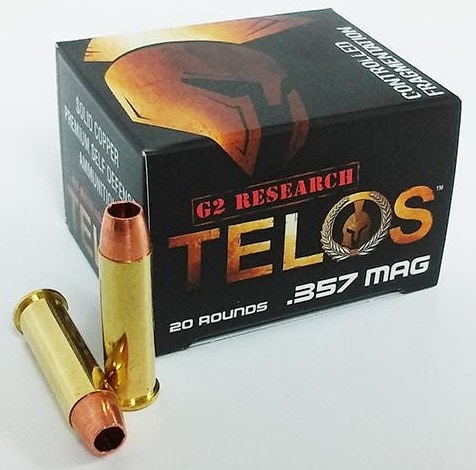 The .357 Magnum joins a variety of other handgun round options on the Telos line. (Photo: G2 Research)

The ammunition is a CNC machined, 105-grain pure copper bullet that is designed to function at 1,300 feet per second. The company says this combination reduces muzzle flash and recoil, allowing quick and controlled follow up shots.

The Telos .357 magnum bullet is built from a pure copper slug to create an internally segmented hollow-point bullet. On impact the round separates in a controlled reaction releasing six segmented copper fragments that spread over 5-inches.

According to the company, the fragmentation results in increased fight-stopping bleeding and pain, creating near-instant shock. Simultaneously, the base of the bullet continues to travel forward for additional penetration. This bullet is designed to stay inside the target where it releases all of its energy. The bullet’s encapsulation inside the target reduces the danger of hitting innocent bystanders from a through and through shot.