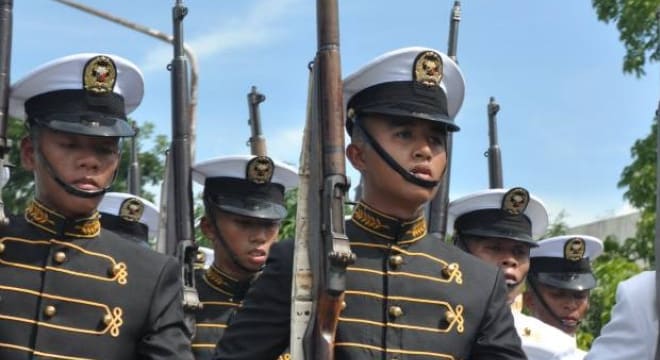 Thousands of surplus M1s were loaned to U.S. allies in Europe and Asia in the mid-20th Century and the guns remain in limited use by the Philippine military (Photo: Philippine Merchant Marine Academy)

The Civilian Marksmanship Program advises the Army could soon hand over a large stock of historically significant M1 rifles.

A post on an M1 Garand collectors group on Friday mentioned a group of loaned rifles coming in from the Philippines was being processed by the U.S. Army for shipment back to the states. Mark Johnson, CMP’s chief operating officer, did not confirm the country of origin but did tell Guns.com that a large group of rifles may indeed be headed home and could end up in the organization’s hands.

The CMP is a federally chartered non-profit corporation tasked with promoting firearms safety training and rifle practice. It originated as the Office of the Director of Civilian Marksmanship in 1903 under orders from Congress to improve the country’s marksmanship skills to minimize training in case of war. Split off from the U.S. Army under the Clinton-administration in 1996, it still conducts training courses and holds shooting competitions nationwide but draws its primary source of funding through the sale of surplus firearms to qualifying members of the public which were donated to the organization by the Army.

However, the CMPs stocks of surplus arms are diminishing.

In 2010, the organization’s most numerous firearm, the M-1 Garand rifle was limited to just 125,000 guns on hand that included complete rifles, stripped receivers, and welded drill rifles. Since then, the Obama administration repeatedly blocked efforts to bring surplus donated military rifles back from overseas allies looking to rid themselves of obsolete hardware. As noted by the CMP’s sale page on the rifle, most common variants became sold out in the past two years.

An influx of 86,000 highly-collectable rifles, largely all made before 1957, would likely revitalize the organization, and ensure its work for years to come.

Thousands of surplus M1s were loaned to U.S. allies in Europe and Asia in the mid-20th Century and the guns remain in limited use by the Philippine military with some ROTC units and provincial police units, including CAFGU auxiliary police.