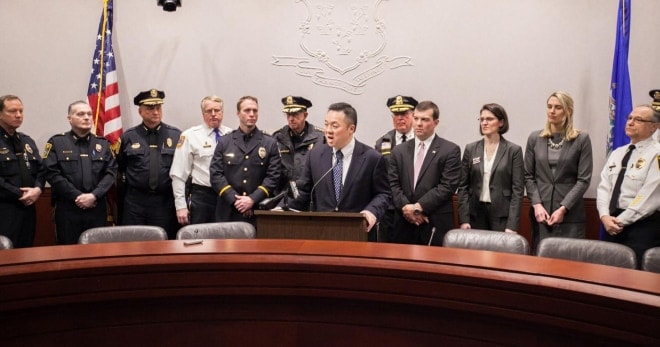 Rep. Tong with other legislators and police chiefs at a press conference in Hartford for the legislation. (Photo: housedems.ct.gov)

A House measure mandating those carrying a visible pistol or revolver to produce their gun permit at the request of law enforcement has died in committee.

The measure, HB 6200, was backed by several gun control groups and police lobby organizations but did not pass out of committee by the required April 7 deadline, effectively killing it for the current session.

Sponsors of the bill argued that having gun owners show their permits if they are carrying openly wasn’t an infringement of their rights and was just the cost of doing business.

“For firearms owners, it’s the basic cost of the privilege of carrying openly a firearm,” said Rep. William Tong (D), one of the sponsors of the legislation when it was introduced.

Tong’s bill would have deleted the requirement that law enforcement officers had to have reasonable suspicion of a crime to stop and check the gun permit of an individual openly carrying a handgun.

Under current law, those with a gun permit can carry either concealed or openly if they have their permit with them. Carrying a firearm without a permit is a felony punishable by up to a five-year prison term or $1,000 fine. Those carrying only must have their permit but don’t have to show it if asked — except in cases where there is probable cause for an officer to think a crime has been committed.

The bill had the support of the Connecticut Police Chiefs Association, the Hartford Courant, the Newtown Action Alliance, the state’s League of Women Voters, Senate President Martin Looney, and CT Against Gun Violence. The groups cited an incident at a Subway and another at a Wal-Mart where an individual who was open carrying resulted in calls to police.

“A small number of pistol permit holders have purposely engaged in open-carry behavior and used the current statute language to create situations in which an officer cannot request their permit,” noted the chief’s group. “These situations are unnerving to the public and have the potential to escalate into confrontations.”

The measure was opposed by the National Rifle Association testified to the Joint Committee on the Judiciary in March that the bill likley violated Fourth Amendment protections against unreasonable search and seizure guaranteed by the U.S. Constitution and argued the bill, if enacted into law, wouldn’t make the state any safer.

Connecticut Carry, a state Second Amendment group that was very vocal in opposition to the measure, welcomed the news that it had failed to advance.

“By killing HB 6200, the Judiciary Committee has done the right thing for all citizens of Connecticut,” said Matt Tyszka, director of legislative affairs for Connecticut Carry, in a statement. “The present language of the statute is the best protection against profiling for all people when exercising any of their rights. The law is clear in that citizens cannot be stopped or detained unless police have a reasonable suspicion of criminal activity.”