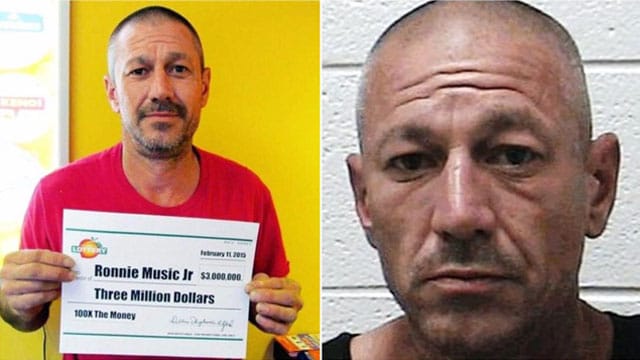 Ronnie Music Jr. won $3 million playing the lottery, but will spend the next 21 years in federal prison. (Photo: Florida Times-Union)

A 46-year-old man from Waycross, Georgia, who hit it big more than two years ago when he won the lottery, will spend the next two decades behind bars for drug trafficking and weapons charges,

A federal court sentenced Ronnie Music, Jr. to 21 years in prison for his role in the trafficking scheme, the Department of Justice announced last week. He pleaded guilty in July to being a felon in possession of firearms and conspiring to traffic large quantities of methamphetamine.

According to court documents, Music won $3 million from scratch-off tickets in February 2015, then used his winnings to invest in massive amounts of crystal meth for redistribution and profit.

Seven months after Music won the lottery conspirators working with Music were arrested after they attempted to sell more than 10 pounds of methamphetamine to undercover agents in the parking lot of a Winn-Dixie in Brunswick. Music, who was the drug supplier, witnessed the botched deal but avoided being caught at that time.

But Music was arrested less than a month after he sold several pounds of methamphetamine to what turned out to be a confidential informant. At the time of the transaction, Music’s girlfriend, as well as the couple’s infant, were in the vehicle with Music.

After Music’s arrest, authorities executed search warrants at his home and place of employment. There, they recovered 11 firearms, including several “assault-style weapons,” a sawed-off shotgun, a revolver which was determined to be stolen, and thousands of rounds of ammunition – none of which Music was allowed to legally possess. Authorities also found what was described as millions of dollars worth of methamphetamine and over $500,000 in cash. Multiple vehicles were also seized as part of the investigation.

The Justice Department noted that altogether the investigation yielded indictments for 21 other individuals involved in the drug trafficking operation. So far, 20 have been convicted.

“This case has received a great deal of light-hearted coverage because of Mr. Music’s unsound investment decision to buy crystal meth with his lottery winnings,” said acting U.S. Attorney Jim Durham. “The truth of the matter is this: Mr. Music is a predator who has destroyed lives by pushing poison and fear. As law enforcement and prosecutors, our job is to protect our communities by sending predators like Music to federal prison for a very long time.”