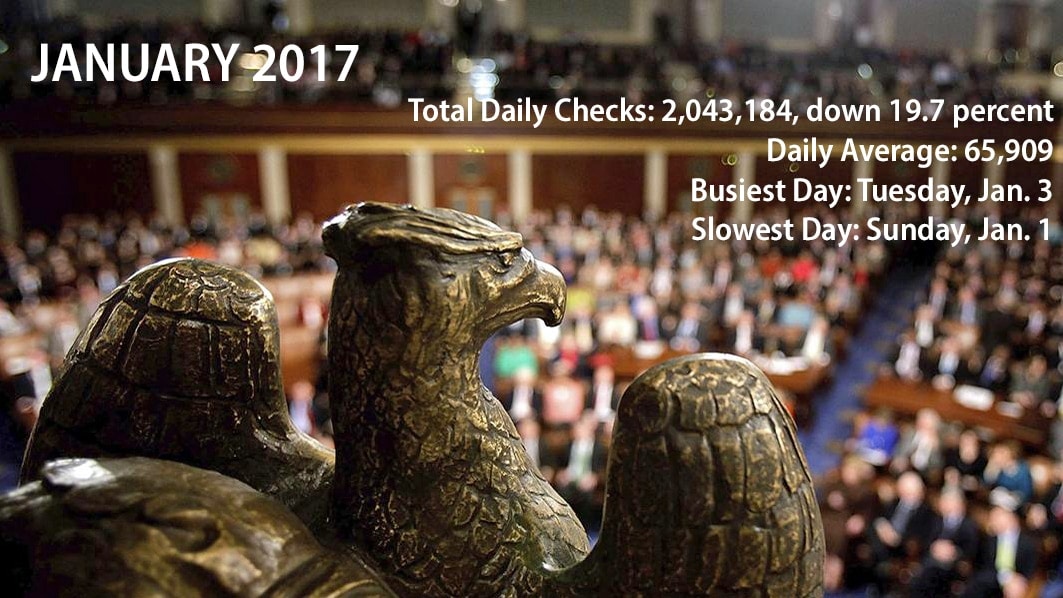 It’s a new year and with it comes a new attitude industry-wide as the “greatest gun salesman of all time” hands over the keys to the White House, closing the door on eight years of failed gun control policy.

While pro-gun legislation made waves on Capitol Hill all month long, background checks fluctuated independently of current events, according to federal data.

The first day of session coincided with the busiest day — and week — all month long for background checks processed through the FBI’s National Instant Criminal Background Check System.

NICS checks serve as a proxy for gun sales, though determining how many checks correlate to one gun sold remains an imperfect science.

The system processed 81,220 checks alone on Jan. 3, a Tuesday — typically a slower day for gun sales. A Guns.com analysis of daily NICS checks reveals a pattern of applications plummeting on Sundays and rebounding over the course of the work week, peaking on Fridays.

A possible correlation between current events and the ebb and flow of background checks, however, doesn’t manifest in the data until the following weekend, if it all.

Democrats and gun control pundits trumpeted the news of declining checks as the “Trump slump” while pro-gun trade groups and lobbying arms chalked up the slowdown to a leveling-out after an unprecedented 2016.

Kentucky Republican U.S. Rep. Thomas Massie promised the proactive approach when announcing the relaunch of the Second Amendment Caucus in December, saying “the recent election results present us with a new opportunity to advance pro-gun legislation and reverse the erosion of the Second Amendment that’s occurred over the last few decades.”

“We probably have 50 bills in Congress that have been sitting dormant because we knew the president would never sign them,” he told CN2. “Instead of being on the defensive, we’re going on the offensive.”

Massie introduced a bill to repeal the 1990 Gun Free School Zones Act on the first day of session — echoing a sentiment shared by President Donald Trump on the campaign trail last year when he promised to sign Gun Free Zones into extinction “on his first day.”

“Our Second Amendment right doesn’t disappear when we cross state lines, and this legislation guarantees that,” he said. “The Concealed Carry Reciprocity Act of 2017 is a common sense solution to a problem too many Americans face. It will provide law-abiding citizens the right to conceal carry and travel freely between states without worrying about conflicting state codes or onerous civil suits.”

On Friday, Jan.6 — the second busiest day all month for NICS — 26-year-old Esteban Santiago opened fire at a baggage claim inside the Fort Lauderdale-Hollywood International Airport, killing five and wounding six others. Santiago told investigators he pledged allegiance to ISIS, though the terror group never claimed responsibility for the attack.

“It just doesn’t make any sense to regulate suppressors the way we do presently,” said bill co-sponsor Rep. Jeff Duncan, R-South Carolina, in January. “I think it certainly is questionable from a constitutional standpoint. It’s striking that even Britain, which has some of the strictest gun laws in the world, has no restrictions on suppressors.”

The number of suppressors registered with the Bureau of Alcohol, Tobacco, Firearms and Explosives tripled to over 900,000 between 2011 and 2016. Loosening the restrictions could spike those numbers even higher, Guns.com previously reported.

The proposal prompted warnings from the industry about shortages should it pass — with some businesses expecting to sell out their entire stock within a week.