There’s an app for that: How mobile tech is shaping the gun industry 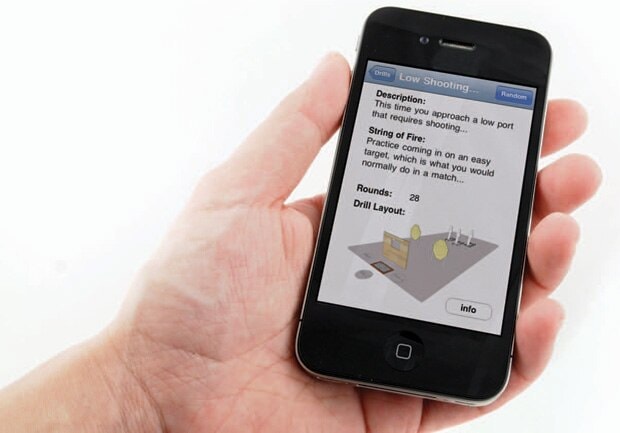 With over 80 precent of the American population owning a smartphone, apps have taken a larger role in providing resources to gun owners. (Photo: USCCA)

During the last two decades the capabilities of portable devices and the quality of the apps therein have dramatically increased. This uptick in new mobile tech is forcing the gun industry, notoriously slow to change, to reevaluate the way it trains and even the way it socializes.

Mobile apps started small, relegated to calculators, calendars and simplistic Java-based games on brick-sized phones in the early 1990s. However as cellphones became more sophisticated, so did the apps that powered them, eventually leading consumers down the path of having the virtual world at their fingertips.

While some training is only smartphone based, not all begin and end with just an app. The newly announced iPTS system utilizes an inert gun and proprietary targets for dry fire training, but also integrates a mobile app. Kevin Creighton, Product Marketing Director for iPTS, told Guns.com in an email that the inclusion of an app not only practical but the best means to track and store shooting data.

“We included an app with the iPTS because we saw it as the best way to tie together the technology built into the iPTS pistol and target,” Creighton said. “As our system provides feedback as you dry-fire, it was important we tie it in with something, and an app made a lot more sense for us versus a program for a home computer, because smartphones and tablets are so powerful and ubiquitous these days.”

Creighton said there’s no doubt in his mind that apps are shaping the training industry in particular.

“Apps are having a tremendous impact on firearms training,” he said. “There is so much that firearms owners can do to improve their shooting ability without having to spend a dime on range fees or ammo.”

Joe Crouch, developer of the iTargetPro, created his app due to the limitations of other laser training options. A means to reach consumers who couldn’t spend hundreds of dollars on complex hardware driven targeting kits, Crouch said the iTargetPro was an opportunity to construct a simple, reasonably priced training system for the every day gun owner.

“As I researched, I was surprised at how limited and expensive these systems were. Some of the more complex systems went for well over $1,000, while the cheaper hardware targeting systems lacked features and still sold for over $300,” Crouch told Guns.com in an email. “Being an app developer,  I saw an opportunity to build an app capable of functioning like these much more expensive laser training systems. I went to work and created the iTargetPro app.”

Crouch said he isn’t trying to pull gun owners away from ranges, instead offering a secondary element to training.

“There’s also some techniques that they won’t allow you to practice at some gun ranges, such as drawing from a holster, which you can practice at home using our app,” Crouch said. “Being able to dry fire practice and get instant feedback of where your shots are hitting makes the experience much more enjoyable. This leads to practicing more often, which leads to better results at the gun range.”

According to Crouch positive results equate to positive consumerism, pushing beginners and even seasoned gun veterans to purchase more guns from brick and mortar stores.

“We’ve had several people who saw our video and wanted to purchase a gun so they could use our app,” he said. “I think the impact will be more people interested in purchasing guns which leads to more people who see the value of our Second Amendment rights.”

“When you have other friends with guns who you can connect with, all of a sudden it becomes less lone wolf and more of a fun, social activity which is also good for the industry,” Rockett told Guns.com. “Ranges are making more money because that’s more ammo sales, more lane time, etcetera and the gun manufacturers are happy because once you buy one gun, you kind of want to keep going.”

Though his app isn’t directly providing training it is offering a resource to shooters, especially newcomers. The Shooting Club allows gun enthusiasts to locate ranges and socialize with friends, removing the intimidation of range time. Its developers recently took features to the next level, adding a firearms instructor locator. The addition seeks to pair potential students with local instructors.

“We’ve also added a ‘find an instructor’ feature,” he said. “Now we’ve got a vehicle for firearms instructors around the country to find new students and find new customers…Uber for firearm instructors.”

Trading in paper targets for virtual bullseyes and swapping pen and paper for detailed mobile ballistic data, mobile technology has revolutionized the way in which Americans live, train and fight. Apps that improve accuracy and shooting, decrease the cost of training and introduce new shooters to ranges and resources only seek to boost the gun industry, bringing more consumers to the gun table.