Man charged with murder after accomplice is killed in botched burglary 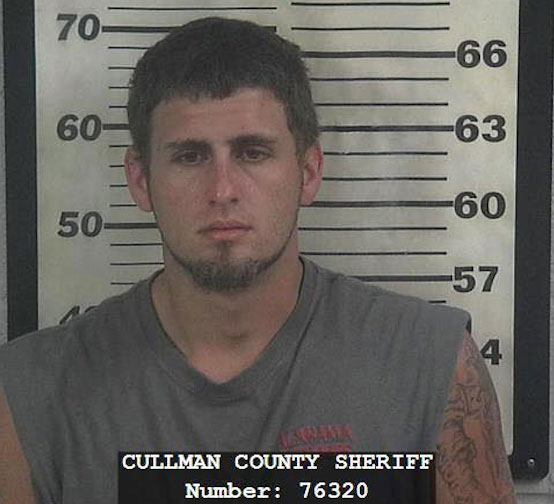 Robert L Kimbrough is facing felony murder and other charges after his accomplice was killed in a botched burglary. (Photo: Cullman County Sheriff’s Office)

A break-in and attempted burglary of a Baileyton, Alabama, home last week resulted in the shooting death of one of the suspects and his accomplice charged with felony murder.

The Cullman County Sheriff’s Office confirmed that Robert L Kimbrough, 27, was apprehended two days after the break-in and subsequent shooting. He has been charged with first-degree burglary, as well as felony murder. The deceased suspect was identified as Johnathan Andrew Smith, 34.

Reports indicate the two suspects went to the victim’s home early Tuesday morning. While Smith, who was armed with a gun, broke into the house, Kimbrough waited in the car. The homeowner, whose name has not been released, was awakened by the sounds of the break-in, and soon he and Smith came face-to-face, and a physical altercation ensued. There was an exchange of gunfire and Smith was struck before he ran outside and both suspects left the scene in a Nissan Altima.

Soon after police responded to a call about the break-in and subsequent shooting, authorities located an abandoned Altima that matched the description of the suspects’ a short distant from the home. Smith was still inside the vehicle, but pronounced dead at the scene. Kimbrough, who had not been identified at that time, was nowhere to be found and a search by law enforcement was initiated. After three hours, authorities concluded Kimbrough had left the area and called off the search.

Once the second suspect was identified as Kimbrough, who is also known as “Mater” and “Budder,” the sheriff’s office posted his picture to social media and asked the public for help locating him. It’s unclear what led to his apprehension, but he’s currently being held at the Cullman County Detention Center without bond.

The homeowner, who suffered minor injuries during the altercation but is expected to be OK, is said to be fully cooperating with the investigation. Cullman County Sheriff Matt Gentry said they have reason to believe there is an existing connection between the suspects and the victim, and that the break-in was both targeted and planned, not a random home invasion. Gentry said the preliminary investigation indicates burglary was the motive and at this point, the homeowner appears to have shot Smith in self-defense.