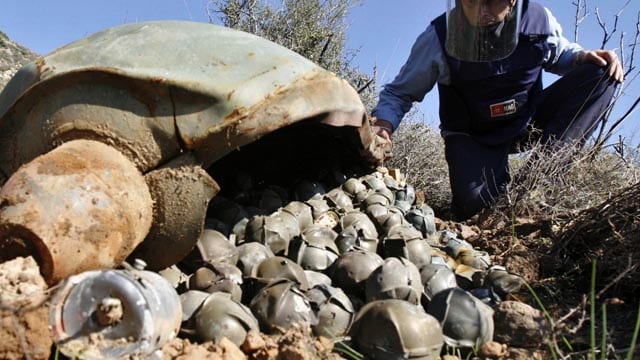 A trio of Democratic lawmakers are introducing a bill that would restrict how the U.S. uses and exports cluster munitions, an explosive weapon that can leave behind smaller, unexploded bombs in civilian areas for decades.

The Cluster Munitions Civilian Protection Act would prohibit the U.S. military from using the weapons if more than one percent of its components result in unexploded material. It also restricts exports of such weapons to foreign countries, and encourages the United States to ratify the Convention on Cluster Munitions — an international treaty ratified by 100 nations and signed by 19 more.

The 2008 treaty prohibits the production, stockpiling, sale or use of such weapons. That same year, then Defense Secretary Robert Gates issued a policy stating that the U.S. would discontinue use of most cluster munitions by 2018, citing a strategic need to continue using the weapons until then.

“The US did not participate in the Cluster Munitions Convention negotiations because we believe that cluster munitions are an integral part of our and many of our coalition partners’ military operations,” Gates wrote to Vermont Sen. Patrick Leahy in September 2008, according to the Landmine and Cluster Munition Monitor.

Now, nearly a decade later, Leahy is joining Massachusetts Congressman Jim McGovern and California Sen. Dianne Feinstein in an effort to move the U.S. closer to Gates’ policy, and the policies of the Convention on Cluster Munitions.

“Cluster munitions, which are scattered by the thousands over a wide area, have caused horrific suffering and death among civilians in every conflict in which they have been used, often years after the fighting ended,” Leahy said in a statement with Feinstein and McGovern.

“While the United States has not widely used cluster munitions since the 2003 invasion of Iraq, U.S.-made cluster bombs have recently been used in Yemen, endangering civilians,” Feinstein said.

“The M77 submunitions have a significant failure rate, up to 23 percent in U.S. military testing, which means that unexploded bomblets remain in the area, posing a serious hazard until they are located and safely cleared,” the organization said.

More than four decades after the war, the U.S. is spending $90 million to help the Southeast Asian country of Laos clear out unexploded ordnance dropped there during the Vietnam War. The U.S. flew 580,344 bombing missions over Laos, dropping 260 million bombs, most of them cluster bombs. An estimated 30 percent of those cluster munitions did not detonate.

“As a world leader, America has a solemn responsibility to stand up for human rights and must join the more than 100 nations that have agreed to never again use or export these weapons by signing the Convention on Cluster Munitions,” McGovern said.

“President Trump and Secretary Mattis must take action and end the use of these indiscriminate weapons altogether,” he said.