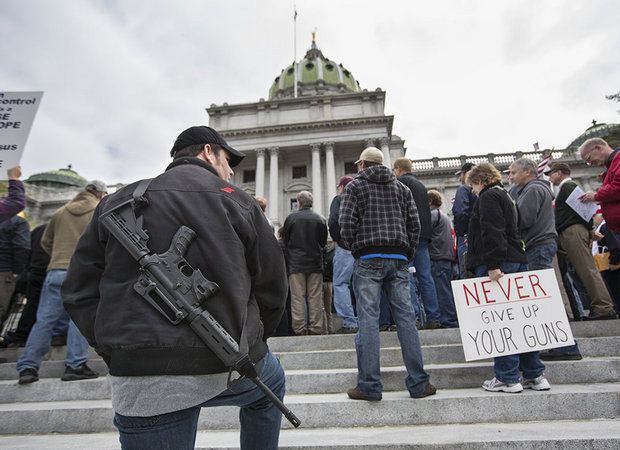 Christopher Kendra of York carries an AR-15 as he joins a large crowd gathered on the front steps of the Pennsylvania State Capitol Building for the Second Amendment Action Day in 2013 (Photo: Joe Hermitt/PennLive)

“There’s a lot of dissatisfaction with how this thing works,” Kim Stolfer, president of Firearms Owners Against Crime, a state-based political action committee, told Guns.com last month. “NICS is not perfect, but PICS is like putting a 20-gauge extension cord between the fridge and the wall outlet. The system is terrible.”

State police operate PICS at a cost of almost $7 million annually. It’s a job the National Shooting Sports Foundation argues the FBI could do for free, as it does for 37 other states,  and it would thwart just as many sales to criminals. Denials through both systems show near identical rates of just over 1 percent, according to the NSSF.

“In an era of rapid  accessible technology, there is no reason for the state government to divert resources away from law enforcement to have the State Police act as an intermediary between federally licensed businesses and the federal background check databases,” the foundation said in an analysis of PICS released last year. “Pennsylvania taxpayers deserve better.”

Co-sponsorship memos for Senate Bill 224 and House Bill 763 both cite the system’s annual budget,  95 percent of which covers personnel costs, as the main reason to ditch the 19-year-old system.

“I believe this money, as well as the fees used to sustain PICS, can be put to better use than supporting a duplicative firearm background check system of limited value,” said Sen. Camera Bartolotta, R-Washington, of her SB 224, in the memo circulated last month. “Eliminating PICS will also streamline the administrative burdens faced by Federally Licensed Firearms dealers surrounding the sale and purchase of firearms, while at the same time, maintaining public safety.”

PICS was implemented in 1998 as a replacement for the state’s mandatory five-day waiting period, costing the Pennsylvania State Police Firearms Division $120 million to maintain over the last two decades.

State police estimate 60 percent of the checks processed through PICS are completed within minutes, but some can take more than two weeks. Meanwhile, NICS operates on the three-day default-to-proceed rule.

Bartolotta said last month her proposal would not only save millions, but also ensure “continued public safety with respect to gun purchases through the national system which most states now utilize.”

She did not return Guns.com’s interview request Tuesday.

Stolfer said problems abound in PICS and the state police  disregards provisions regulating the sale of firearms, including the agency’s insistence on maintaining a record of gun sales, which is barred by federal law.

He said simple mistakes can trigger a rejection in the system — from transposed social security numbers to outdated court records — and there is little recourse for residents to appeal a denial.

“Further, if a court record or FBI report is incomplete or ambiguous, authorities in Pennsylvania presume the worst, and leave it to the individual to prove otherwise,” he said in written testimony submitted to the Republican Policy Committee in 2013, in favor of an earlier, identical proposal.

Stolfer said the system itself also crashes during weekends and holidays, while NICS remains operational — a common problem the state police show no interest in fixing.

“In other words a constitutional freedom is at the mercy of a machine with ‘no’ backup protocols established by the PSP to fulfill their responsibility to administer firearms background checks,” he said. “This means in essence that the 2nd amendment will cease to exist in the event of mechanical or electronic failure. This we find unacceptable.”

Dealers complain the system functions so poorly, it shutters gun stores and forces businesses across state lines. Stolfer agreed about half of the dip in federally licensed dealers statewide, from just over 11,000 to less than 3,000, can be attributed to PICS.

In one analysis of a gun store in Washington County provided to Guns.com, background checks for 20 customers were inexplicably delayed between January 2010 and July 2010. Almost half of those customers never returned to the store to complete the sale.

Eliminating PICS, marketed as a  perennial cost-cutting measure, has so far been rejected by fellow legislators despite a mounting $3 billion budget deficit.

A spokesperson for House Judiciary Committee Majority Chairman Rep. Ron Marsico, R-Dauphin, said Monday there are no scheduled hearings for HB 763 in the near future.