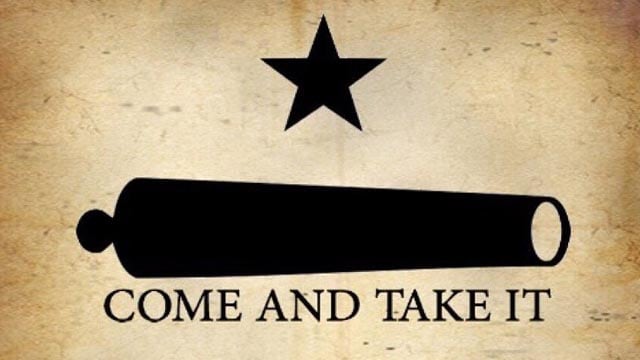 “Come and take it” became a symbol of defiance for Texas following the Battle of Gonzales during the Texas Revolution in 1835.

The Lone Star State has a lot of state symbols, and the list is about to get weaponized after a resolution passed a senate committee last week. Senate Concurrent Resolution 8 would designate the cannon as the Texas state gun, with other pending resolutions outlining the official handgun (note the distinction), and the state knife.

“The very first conflict of the Texas Revolution, the Battle of Gonzales, was fought over a cannon,” reads SCR 8. “On October 2, 1835, the 150 Texian rebels at Gonzales refused to surrender their bronze six-pounder to Mexican dragoons; they pointed instead to the cannon and declared, “Come and take it!”

“Obviously the cannon is the most significant symbol we have for the state of Texas, our sense of independence, our strength of being responsible as individuals and not reliant on the government,” said Huffines at Thursday’s senate hearing, the Guardian reported.

And to the gun control advocates ready to object, Huffines said, “We don’t have people down here complaining about cannon control.”

Since the cannon is an unconventional choice for state gun, another measure, House Concurrent Resolution 51, argues for the original 1847 Colt Walker pistol to be designated as the official handgun of Texas.

“The co-inventor of the original 1847 Colt Walker pistol, Samuel Walker, was a captain in the Texas Rangers, the first state police agency in the country,” wrote state Rep. Mike Lang in the resolution, adding that the Colt is “still the most powerful black powder pistol in existence.”

The Colt Walker was the first revolver ever purchased by the Army Ordnance Department, according to the National Museum of American History.

HCR 51 was assigned to the Culture, Recreation, and Tourism committee on March 7.

To round out the small cache of state weapons, House Concurrent Resolution 32 would designate the Bowie knife as state knife.

“The weapon’s fame grew when Jim Bowie took it with him to Texas, and he and other defenders of the Alamo are thought to have used the knives during the battle,” wrote state Rep. Drew Springer.  “The Bowie knife later became popular with the Texas Rangers who served under the legendary Jack Hays and Ben McCulloch, as well as with Confederate soldiers, who were known to engrave “Sunny South” and other mottoes on the blades of their knives.”

Eight states have designated firearms as state symbols, starting with the M1911 pistol in Utah in March 2011. A month later, Arizona chose the Colt Single Action Army revolver. Indiana, West Virginia, Kentucky and Pennsylvania have all designated rifles as their state firearm. Alaska chose the Pre-1964 Winchester Model 70, and most recently, in February 2016, Tennessee went with the Barrett M82.