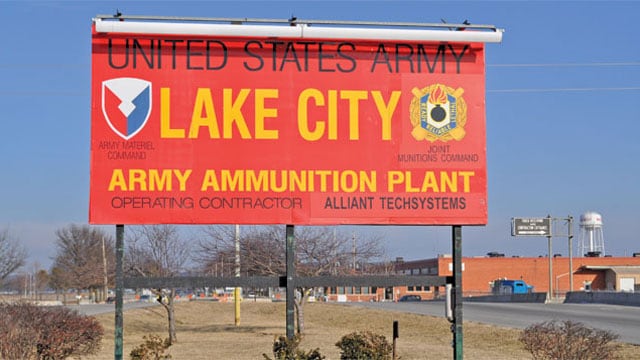 Lake City Army Ammunition Plant was cited by OSHA in the past for “serious” issues with safety management. (Photo: Small Arms Defense Journal)

An explosion at an ammunition plant in Independence, Missouri, on Tuesday afternoon resulted in the death of an employee.

The incident occurred around 1 p.m. at the Lake City Army Ammunition Plant just outside of Kansas City, according to the Army Times.

The deceased victim was identified as Lawrence Bass, 55, of Blue Springs, Missouri. He had worked at the plant for 36 years. Four others were injured in the explosion. They were treated at the scene and all four declined further medical treatment.

According to the U.S. Army, the plant manufactures small caliber munitions for the military – to the tune of 1 billion rounds of ammunition annually – conducts contract oversight, and operates a NATO test center. Following the explosion, the entire plant was shut down and all 1,800 employees sent home with instructions to call before returning to work.

Justine Barati, director of public and congressional affairs for Joint Munitions Command, which owns the plant, confirmed in an email to Military.com that the explosion occurred in a primer mixing cell at the facility. The investigation, which is being led by the ATF, is ongoing and will aim to determine the exact cause of the explosion.

But this wasn’t the first incident at the facility either. In fact, six people were injured in 2011 during another explosion at the plant. At that time, the contractor in charge of operations was Alliant Techsystems, which was fined $28,000 after OSHA cited “serious” issues in safety management.

Orbital-ATK, the company now in charge of operations, released a brief statement reiterating that an investigation is underway, while expressing condolences to the Bass’ family.

Kack Miller, who has lived next door to Bass for a decade, described him as “the nicest guy,” friendly, and always smiling. Miller said news of Bass’ death has left him in shock.

“At this time our family will not be making a statement on camera. We are devastated, in disbelief and heartbroken for the loss of a son, brother, father and grandfather. We are thankful for the many prayers and ask for the respect of the media during this time,” the statement said.