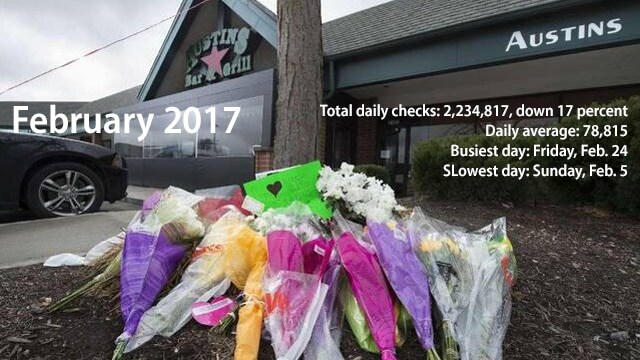 It’s not unusual for the gun industry to see a boost in sales during February and this year’s trend proved no different as dealers moved an estimated 1.2 million firearms — a 23 percent increase over the month before.

In fact, the only year to witness a dip in February’s federal background checks — and by proxy, gun sales — came in 2013, as hysteria of impending gun regulations in the wake of Sandy Hook tapered off.

Despite indications of a slowdown in December and January, however, applications processed through the National Instant Criminal Background Check System crept up more than 190,000 in February, averaging nearly 79,000 checks daily all month long.

The National Rifle Association pointed to the upswing as proof the “Trump Slump” doesn’t exist, while gun control advocates and media reports of a recalibrating industry spread nationwide.

While still 17 percent behind last year, the biggest days of 2017 thus far came when dealers processed 377,625 background checks over a three-day span, from Thursday, Feb.23 to Saturday, Feb. 25.

“Comparing current data to the record high points doesn’t prove that sales have plummeted; it does indicate that the number of background checks performed – and so the number of permit applications and/or firearms purchases – is still at near-record levels,” the NRA said. “February 2017, one of the months cited as proof of the “Trump Slump” was actually one of the 15 busiest months ever for background checks.”

Just a day before the sharp increase in background checks, 51-year-old Adam Purinton opened fire on two Indian nationals inside Austin’s Bar & Grill in Olathe, Kansas, killing one and wounding two others.

Several witnesses told investigators they heard Purinton yell “get out of my country” before firing.

A Guns.com analysis of daily background checks uncovered a pattern of applications bottoming out on Sundays and rising throughout the work week until peaking on Friday. The impact of current events or politics on background checks, however, doesn’t always manifest in the data in the immediate aftermath of an incident, if at all.

Still, background checks for the three days following the shooting outpaced the fourth busiest day of the month — Friday, Feb.17 — by more than 28,000 checks.

The proposal reverses an Obama-era rule dating back to his first term, when veterans assigned fiduciary trustees were automatically reported to NICS as “mentally defective,” stripping away gun rights.

Roe’s bill, H.R. 1181, would require a hearing before the Department of Veterans Affairs could report the beneficiary to the FBI.

“The freedoms granted by the Constitution should apply to all Americans—especially the men and women who have been willing to risk their lives to protect those freedoms,” Roe said. “This commonsense bill would ensure no veteran or beneficiary is declared ‘mentally defective’ simply because they utilize a fiduciary.”

Critics of the bill argued it would jeopardize the lives of veterans battling mental illness after returning from deployment.

“This gun lobby-backed proposal turns a blind eye to our country’s suicide crisis in which, on average, 20 veterans take their lives every day – and two-thirds of those suicides are carried out with firearms,” said Everytown President John Feinblatt in a statement. “This bill would put more veterans in danger by allowing vets suffering from severe mental illness who are prohibited from purchasing guns to buy them again. But the gun lobby isn’t concerned about that – they care about advancing their extremist ‘guns for everyone’ agenda.”