Press Secretary Sean Spicer confirmed Thursday that the U.S. had dropped a “large, powerful, and accurately delivered” bomb on ISIS tunnels and caves in Afghanistan.

“At around 7 p.m. local time in Afghanistan last night, the United States military used a GBU-43 weapon in Afghanistan,” Spicer announced at a press briefing. “The GBU-43 is a large, powerful, and accurately delivered weapon.

“We targeted a system of tunnels and caves that ISIS fighters used to move around freely making it easier for them to target U.S. military advisers in Afghanistan and Afghan forces in the area.”

CNN reported that the 21,600 pound GBU-43/B Massive Ordnance Air Blast Bomb, nicknamed the “mother of all bombs,” is the most powerful non-nuclear bomb ever used by the U.S. military and was dropped in the northeastern Nangarhar province. According to Pentagon spokesman Adam Stump, the bomb was dropped by an MC-130 aircraft operated by Air Force Special Operations Command. 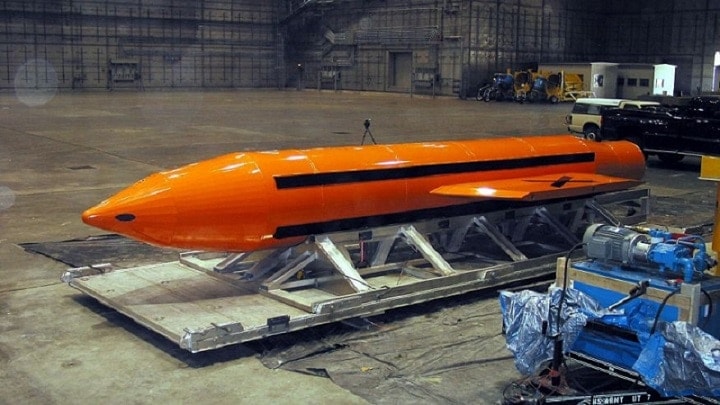 The GBU-43/B Massive Ordnance Air Blast Bomb, the most powerful non-nuclear bomb ever used by U.S. military, can create a blast radius stretching a mile in each direction. (Photo: DOD/Getty Images)

“The United States takes the fight against ISIS very seriously and in order to defeat the group we must deny them operational space, which we did,” Spicer said. “The United States took all precautions necessary to prevent civilian casualties and collateral damage as a result of the operation.”

According to U.S. officials, this is the first time that a MOAB, a weapon developed during the Iraq War, has been used on the battlefield.

The military is in the process of assessing the damage, sources told CNN. Gen. John Nicholson, commander of U.S. forces in Afghanistan, reportedly authorized the use of the massive bomb.

“As ISIS-K’s losses have mounted, they are using IEDs, bunkers and tunnels to thicken their defense,” Nicholson said in a statement following the strike. “This is the right munition to reduce these obstacles and maintain the momentum of our offensive against ISIS-K.”