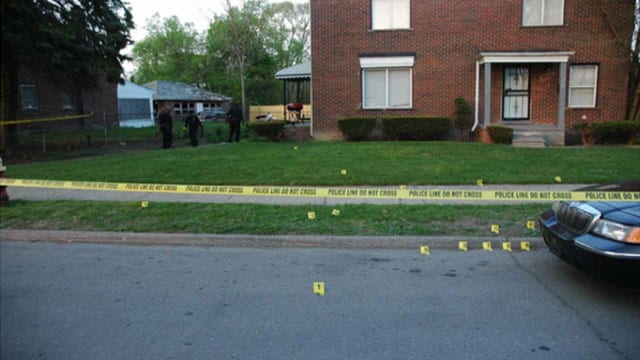 Prosecutors noted the close proximity of other homes and innocent bystanders where the shooting occurred. (Photo: Department of Justice)

A leader of the Vice Lords street gang was sentenced in federal court to 162 months in prison for the part he played in a May 2015 drive-by shooting that injured a family of four in Detroit.

Court documents show the shooting was a well-planned, coordinated attack, targeted at two brothers who were attempting to leave the gang.

Burney “Tank” Everett, 27, pleaded guilty in October 2016 to two counts of assault with a dangerous weapon in aid of racketeering and one count of use and carry of a firearm during and in relation to a crime of violence. Everett, who is one of nine defendants involved in the case and the highest-ranking Vice Lords member of those nine, admitted to ordering the hit on the brothers.

“Everett controlled the Vice Lords by ordering violent retribution against anyone who crossed him, his revenge had no limits,” said Acting Assistant Attorney General Blanco. “I am proud of the unified efforts of our prosecutors and law enforcement partners, including the Detroit One partners, who successfully brought Everett and other Vice Lord members to justice. The Justice Department will continue to work closely and jointly with all of our Federal, state and local law enforcement partners to investigate, prosecute and dismantle violent gangs, like the Vice Lords, wherever they may be present.”

The shooting, which was carried out with an AK-47, left the two brothers, their mother, and 15-year-old sister injured. Although a total of 23 shots were fired into the home, all four victims survived. Noting numerous other possible outcomes of the shooting, Acting U.S. Attorney Daniel L. Lemisch of the Eastern District of Michigan, wrote in a sentencing memorandum, “It is patently obvious that the defendant and his fellow Vice Lords have no regard for the lives of others.”

All nine defendants involved in the shooting have pleaded guilty to their charges. Thus far, seven, including Everett, have been sentenced. Antonio Clark, 27, who fired the gun, was given 240 months, the longest term of all the defendants.

However, Acting U.S. Attorney Lemisch pointed to the importance of Everett’s conviction and sentence and the message they hope it sends.

“This lengthy sentence underscores that one does not have to be physically present at a shooting to bear the full brunt of criminal responsibility and punishment,” Lemisch said. “We hope Mr. Everett’s sentence sends a strong message of deterrence to those who may want to pursue the gang lifestyle.”