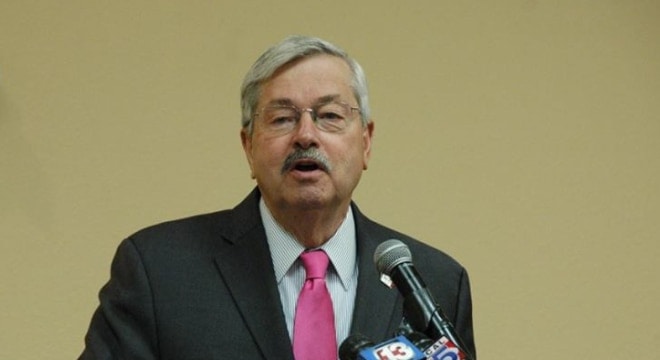 Gov. Terry Branstad commented that the new law makes, “Iowa one of the most pro-2nd Amendment states in the country.” (Photo: Gov. Branstad’s office)

In all, Branstad signed some 14 pieces of legislation to include HF 517, an omnibus gun rights package, and HF 475, a popular measure expanding the use of straight-walled cartridge rifles to hunt deer.

Of the two, HF 517 was by far the more controversial in its passage and was subject to lengthy debate in the GOP-controlled legislature before passing the Iowa Senate 33-17 and House 57-36 earlier this month.

“Just signed HF517, making Iowa one of the most pro-2nd amendment states in the country,” Branstad posted to social media.

The new law removes the duty to retreat from Iowa’s self-defense statutes on the use of reasonable or deadly force. This so-called stand-your-ground model has been adopted in many conservative states with Florida passing the first of its kind in 2005.

Next, the law puts gun permit holder information out of bounds from public and Freedom of Information Act requests. Previously, anyone could get the name, address and birth date of concealed carry permit holders.

In addition to the use of force and privacy sections, the act includes mandates to loosen regulations on youth handgun possession for target shooting and hunting reasons provided they are given the firearm by a parent, instructor or guardian. Prior to the new law, only youth 14 and over could legally shoot handguns.

Finally, the law strikes gun-free zones at the state capitol, expands Fourth Amendment search and seizure protections for those carrying firearms, scraps the state ban on short barreled rifles and shotguns, and prevents officials from restricting the carry of firearms during a state of emergency.

Gun control organizations pushed hard to derail HF 517 during the legislative process and urged the governor for a veto, arguing the package was a danger to public safety.

“No matter what your position was on this bill, none of us wants to see the kind of homicide rate increase here that other states have seen after enacting Stand Your Ground laws,” Amber Gustafson, with the Iowa chapter of Moms Demand Action said in a statement.

Meanwhile, Second Amendment groups including the National Rifle Association were pleased with the new law. Chris Cox, executive director of the NRA’s lobbying arm, said, ““It is a great day for freedom. Today, Iowa joined the nationwide movement to expand law-abiding citizens’ constitutional right to self-protection.”

Also signed into law is an expansion of the state’s hunting regs to allow the use of straight-walled handgun cartridges .357 caliber and larger already approved for pistol and revolver hunting in rifles chambered for the same round.

The law directs the Iowa Natural Resource Commission to establish rules allowing the use of the rounds in long guns during the youth and disabled deer hunting seasons and for the first and second shotgun deer hunting seasons by licensed hunters. Possession of a prohibited rifle can result in a $250 fine.

The measure was well-received in the legislature, passing unanimously in both the House in March and the Senate in April while the Iowa Department of Natural Resources was reportedly neutral on the bill.