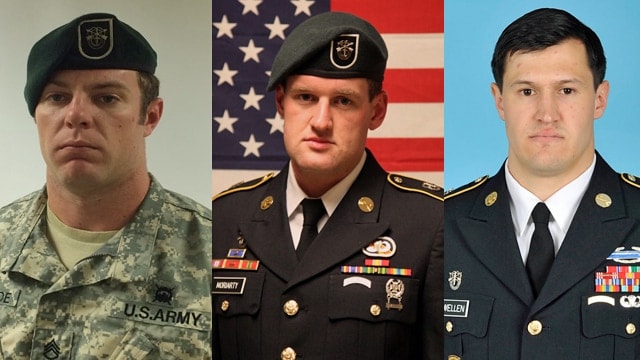 After months of defending him, officials in Jordan say the guard who shot and killed three Green Berets in November will face prosecution.

M’aarek Abu Tayeh, a member of the Hashemite forces in the Arab nation, did not follow the military’s protocol in the shooting, and will be tried in a military court, a Jordanian Embassy spokeswoman told the Washington Post.

“The incident is being investigated as a crime, as such it is clear from a review of the latest available evidence that M’aarek Abu Tayeh was not following Jordanian rules of engagement,” said spokeswoman Dana Daoud. “The formal investigation will make that final determination with certainty.”

Staff Sgt. James “Jimmy” Moriarty, 27, Staff Sgt. Matthew Lewellen, 27, and Staff Sgt. Kevin McEnroe, 30, were killed at a Jordanian checkpoint Nov. 4 when Abu Tayeh opened fire. Jordanian officials have called the incident a misunderstanding, saying the guard heard a loud noise and believed the base was being attacked when he started shooting. But after seeing surveillance video of the incident, families of the slain soldiers disagree, calling the incident “cold blooded murder.”

An ally to the U.S., this is a tricky situation for Jordan. Last month, the government said Abu Tayeh was following military rules when he opened fire. But now, in a change of tune, King Abdullah II has vowed to support the criminal investigation.

“His majesty’s letters of condolences will be delivered to the families soon,” said Daoud.

For the father of one of those soldiers, apology letters aren’t enough.

“If the King of Jordan thinks that writing a pious letter saying that he feels really bad that our boys are dead and an investigation is being conducted, that is not going to be nearly enough,” said Jim Moriarty.

According to a Department of Defense investigation, the three Green Berets were part of a four-vehicle convoy that pulled up to a checkpoint at King Faisal air base. The shooter was stationed in a guard box and opened fire on the second vehicle with his M-16, killing McEnroe and wounding Lewellen.

His father, Jim Moriarty, was able to watch surveillance video at an FBI field office in Virginia. He told the Post there was no loud noise at the beginning of the shooting. What’s more, 11 other Jordanian soldiers in the area didn’t respond.

“Before Jimmy took two shots to the heart, he’s talking and trying to signal that they aren’t a danger. The guard is shooting at Jimmy and another American while they have their arms in the sky — he’s trying to kill them,” said Moriarty.

While the Jordanian government has shifted positions, it’s still unclear when the trial of Abu Tayeh will begin.

“Nobody is going to kill my kid and get away with it,” said Moriarty. “I’m going to be chewing on the Jordanian government’s ankles until they are walking on stumps.”