LGBT gun group opts for self defense over gun control 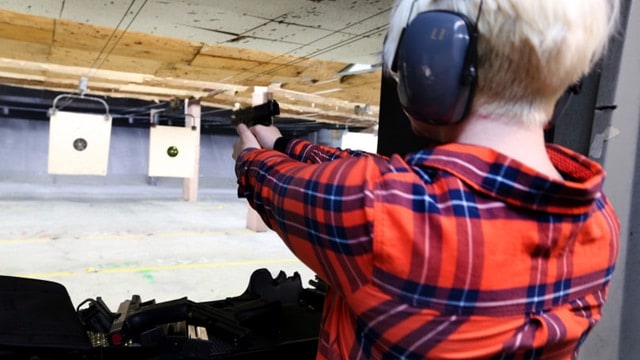 Alexandria Kellner, of Oakland, learns how to shoot firearms during the Pink Pistols biweekly gathering at the San Leandro Shooting Range in San Leandro, Calif., on Wednesday, April 12, 2017. It was Kellner’s second time attending this program, which is an organization dedicated to teaching LGBT how to use firearms for self-defense. (Photo: Ray Chavez/Bay Area News Group)

Founded 17 years ago after the death of Matthew Shepard, a gay college student murdered in Wyoming in 1998, Pink Pistols teaches self-defense with firearms — and with more than 50 local chapters nationwide, the group stands out among the crowd for its different approach to preventing hate crimes.

“The people who would prey on the LGBT community chiefly did so because they saw us as weak and defenseless,” Gwen Patton, the group’s national spokesperson, told The Mercury News Thursday. “We say in our mission statement that we teach queers to shoot, and we teach the world that we’ve done so.”

The group’s website said membership only requires a belief “in the basic core principles of the Pink Pistols, that all people have the right to defend themselves from harm, and that everyone has the individual right to keep and bear arms as protected by the Second Amendment.”

Nicki Stallard, a 57-year-old transgender woman living in California, told the newspaper the group’s approach appealed to her.

“The premise was you should carry a whistle, blow it if you got attacked, and someone would come and help you or call the police,” she said. “But the sad reality is a lot of people ignore the whistles and don’t want to get involved.

Gays Against Guns, founded in the wake of the Pulse nightclub shooting in Orlando last year, told the newspaper the group’s campaign is “misguided.” It was one of 50 gun violence prevention groups who signed a letter to Congress the week after the shooting urging an expansion of federal background check laws.

“People are thinking that this is the Wild West and you’ve got to get a gun to be able to survive, and it’s insanity,” Terry Roethlein, a spokesperson for Gays Against Guns, told the newspaper. “We’re pushing up against that because the reality is, you’re just making things worse by creating an environment where there are guns everywhere.”