'Mother of all bombs' kills dozens of militants in Afghanistan (VIDEO)

The largest non-nuclear bomb ever used by the U.S. military killed dozens of ISIS militants in a strike on a network of tunnels in Afghanistan, according to the Afghan defense ministry.

The BBC reported Afghan officials said the strike killed 36 Islamic State militants in the northeastern Nangarhar province and that no civilians were hurt from the massive explosion.

Defending the use of the bomb, the U.S. military said it was “the right weapon against the right target.”

Gen. John Nicholson, commander of U.S. forces in Afghanistan, held a press conference Friday and said: “We have U.S. forces at the site and we see no evidence of civilian casualties nor have there been reports.”

Nicholson also said it was “the right time to use the GBU-43 tactically.”

“Let me be clear,” Nicholson added, “we will not relent in our mission to destroy [IS in Afghanistan]. … There will be no sanctuary for terrorists in Afghanistan.”

The Afghan defense ministry said the 21,600-pound GBU-43/B Massive Ordnance Air Blast Bomb struck a village in which ISIS fighters had dug a series of tunnels and caves. The strike also reportedly destroyed a large stock of weapons.

ISIS commander Siddiq Yar was taken out during the strike, according to Afghan presidential spokesman Shah Hussain Murtazawi. The spokesman said the militants had “come from Pakistan and were persecuting people in the local area.”

Achin district governor Ismail Shinwary told the BBC that Afghan special forces had begun operations in the area 13 days ago, with the help of U.S. air support.

Regarding the MOAB strike, Shinwary said the blast was “the biggest I have ever seen.” 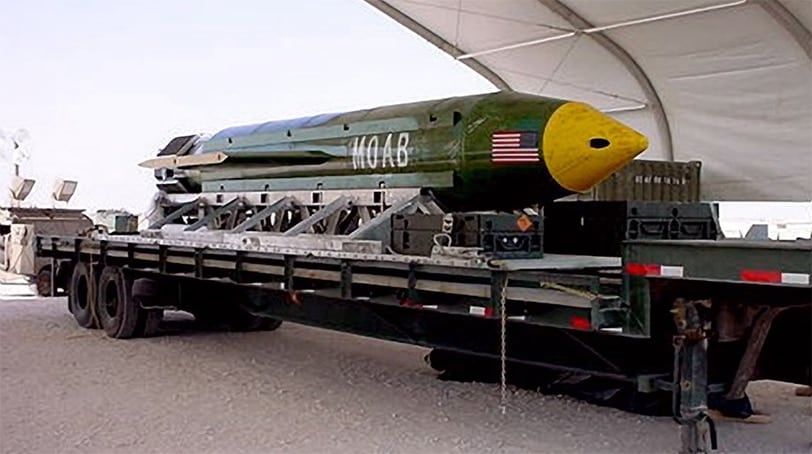