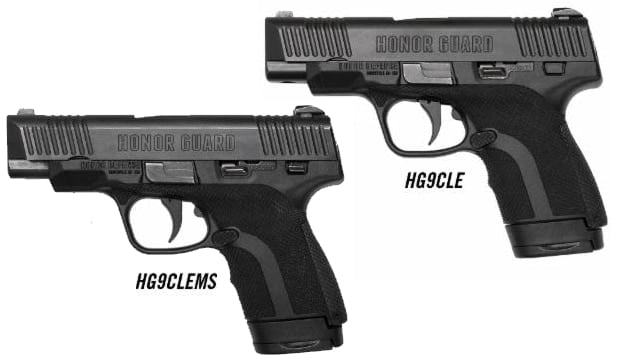 The new models, the HG9CLE and HG9CLEMS, are aimed at backup and off duty police personnel, but will also be available for commercial use.

The two 9mm models are near identical, expect that the HG9CLEMS version features a manual safety.

Both pistols boast 3.8-inch barrels on a stainless-steel modular chassis. The slide and barrel are both outfitted with a ferritic nitro-carbonized finish and approved for +P ammunition use. The Honor Guard pistols utilize stainless-steel striker housing with an integrated striker block for safety. Boasting ambidextrous use, the pistols can be used by righties or lefties and shot one-handed if necessary.

The guns ship with two eight round magazines and two backstraps to accommodate a variety of hand sizes.

Honor Defense says the latest models come after a series of requests for a LE-specific version.