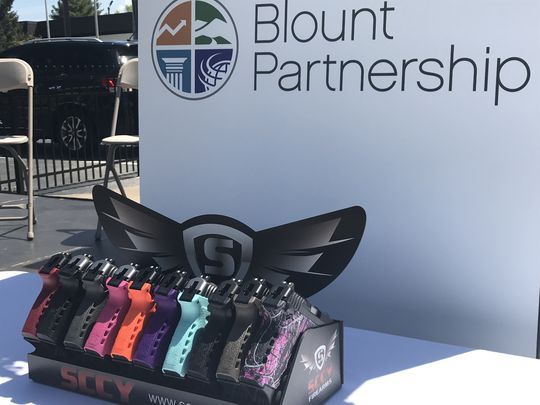 Sccy pistols were on display in Maryville as the company announced the move to Tennessee. (Photo: Jim Gaines)

Sccy Industries is leaving Florida, announcing Wednesday that it will move its factory and headquarters to a new 68-acre campus in Maryville, Tennessee.

The Knoxville News Sentinel reported that the new campus will consist of five industrial buildings and a  “sky lodge” with outdoor range to accommodate visiting industry partners and gun writers.

Sccy will pump approximately $22.5 million into the new facility with construction expected to begin later this year or early 2018. Firearm production will commence in the Big Springs Industrial Park in Maryville by mid-to-late 2018.

Initially, the company will hire 200 local employees. However, CEO and founder Joe Roebuck said he plans to continue adding 50 to 60 people per year for three years. Roebuck said Sccy will bring a minimum of 350 jobs to the Maryville area.

Tennessee Gov. Bill Haslam welcomed Sccy to the Volunteer State in a press release, sharing his excitement for the 150,000-square-foot facility.

“In Tennessee, we pride ourselves on craftsmanship and manufacturing excellence,” Haslam said. “Our skilled workforce is known for producing some of the world’s best-known products and brands. I’m pleased that SCCY has chosen to join the growing roster of manufacturing companies that call Tennessee home.”

Sccy is best known for its CPX series of 9mm handguns available in a variety of color options.