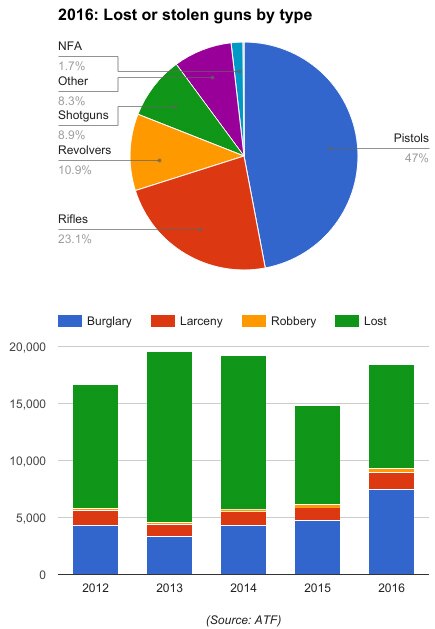 The number of guns stolen from licensed dealers last year increased more than 50 percent, according to an annual report published this week by federal authorities.

The Bureau of Alcohol, Tobacco, Firearms and Explosives said 9,281 firearms were reported stolen by federal firearms licensees during calendar year 2016. That figure is up from 6,163 guns reported stolen the year before.

Most concerning maybe the 59 percent increase in burglaries of gun stores, often represented by a dramatic smash and grab scenario.

The ATF emphasized the 175 percent growth in robberies — meaning the theft from a person by force or threat of force — since the agency began reporting the data in 2012. Last year saw 370 robberies all across the country.

Lost firearms accounted for just shy of 50 percent of the total 18,394 guns reported missing in 2016.

According to the report, FFLs must report each lost or stolen firearm within 48 hours of discovery as well as the appropriate local law enforcement agency.