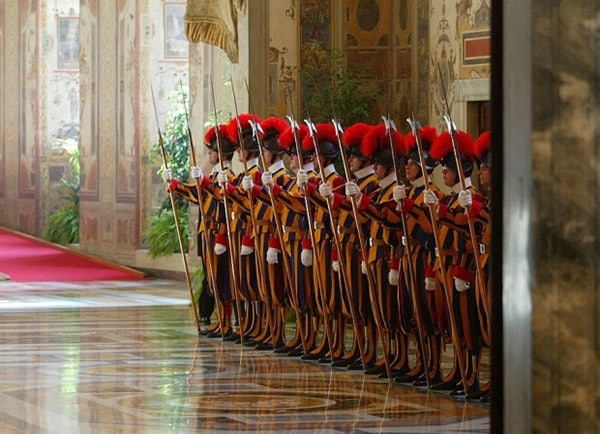 The Vatican’s Swiss Guard has been on protection detail since the 1500s. 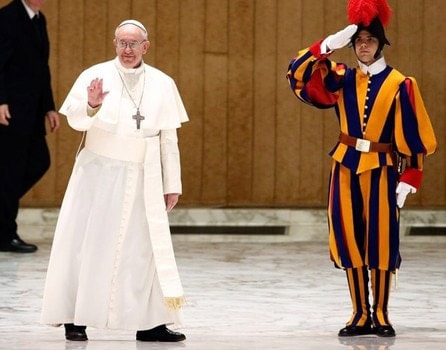 Sure, they may look funny in their brightly colored costumes, complete with feathered metal headgear, but these soldiers are the only military force for the smallest country in the world. They are also one of the best equipped.

Who is the Swiss Guard?

If you ever watch footage of the Pope, in the background you will often see a ceremonial guard dressed in an odd uniform. Made up of an extremely garish combination of purple and gold and cut in the style of a 15th century jester, these guards add an interesting flair to the Papal office, though their function is far from ceremonial. These men (no women are allowed) are all sworn members of a company of professional soldiers that dates back more than five centuries to 1506 making them the oldest military unit that has seen continuous service in history. 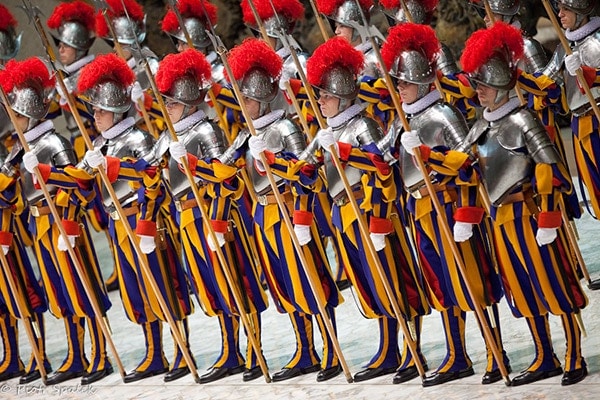 Swiss Guards may look like toy soldiers but they are actually all trained and experienced military men serving in the oldest continuously operating unit in the world. That looks pretty good on a resume. 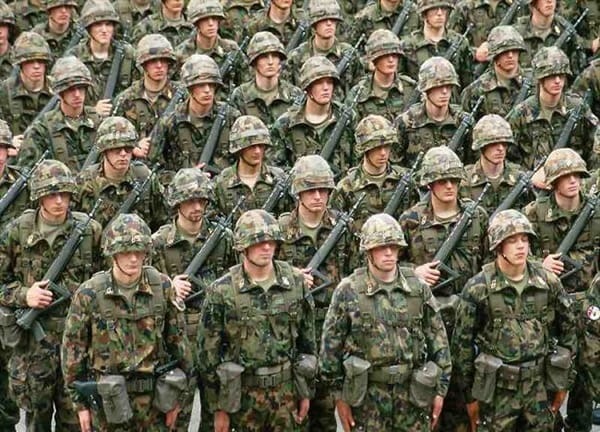 Every Swiss Guardsman is drawn from the regular Swiss Army. 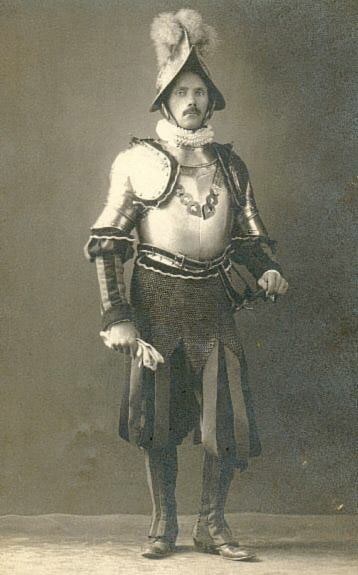 The Swiss Guard’s attire is fairly timeless although their firearms are not.

Formed of 110 officers and men, the Pontifical Swiss Guard are the defacto military of the Vatican City, an independent country of just .17 square miles (110-acres) in size located inside Rome, Italy. They are responsible for the security and safety of the Pope as well as the Papal facilities.

All of the members are volunteers serving 25-month contracts. To be a member you have to be an adult male Swiss citizen, at least 5-foot, 8-inches tall, under 30 years of age, and have successfully completed prior service with the Swiss Army. Once selected members receive further training in less-lethal weapons, crowd control techniques, dignitary protection, and other skills needed in their future job.

The Guard takes their mission seriously. In 1527 during the Sack of Rome, the Swiss Guard suffered more than 80% casualties in a rear guard action known forever as the Stand of the Swiss Guard, which allowed the then-current Pope to escape. The Guard responds to regular attacks on the Pope both in the Vatican and abroad.

Medieval styling but modern behind the scenes 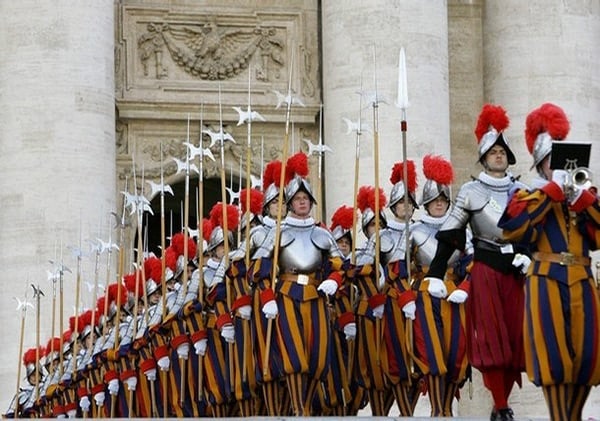 While on parade the Swiss Guard are equipped with halberds, swords and pikes. If things ever go hot though, be aware that they can switch to SIGs, HKs and Glocks in double time. 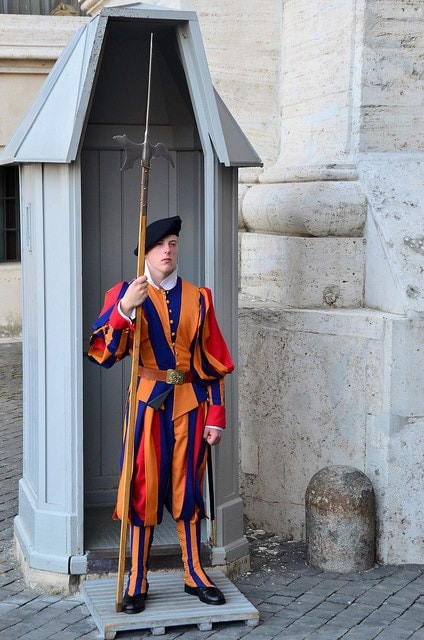 On public duty (i.e. tourist duty) the Swiss Guard uses medieval weapons like pikes, Swiss voulges and short swords. They are however fully trained in combat with all of these…

While the public face of the Swiss Guard is the classic Michelangelo uniform with armor plate, plumes, and Conquistador-style Morion helmets, this is for the benefit of the tourists. Sure, these soldiers receive specialized training in these Renaissance-age weapons and the last thing you would ever want to do is pick a fight against a Swiss soldier with a 9-foot long steel pike unless you had a modern firearm, but they are not the Vatican’s only means of defense. Located deep inside the barracks of the Swiss Guard is an arsenal of arms that the soldiers train with constantly over the course of their service and, today, this steel is far from archaic.

For almost 80 years, the officers and NCOs of the Swiss Guard were armed with Hugo Schmeisser’s very homely Dreyse Model 1907 pistol. This 7-shot .32ACP was ugly but reliable. After the attempted assassination of Pope John Paul in 1981 by a Turkish hitman, the Guard upgraded these handguns to the logical SIG P220, which is standard issue for the Swiss Army.

There are also a number of Austrian-made Glock Model 19 9mm pistols used when a more concealable duty weapon is desired, such as on overseas dignitary protection. 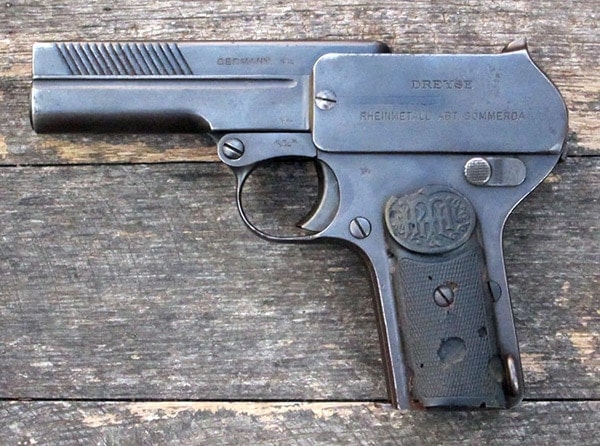 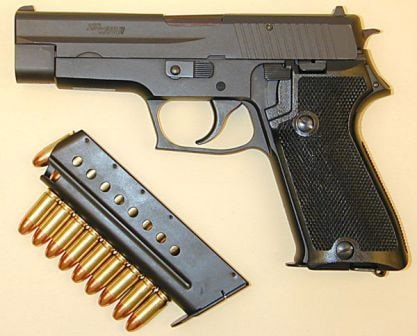 Since 1990, the standard issue pistol of the Swiss guard has been the Sig P220.

Rifles of the Swiss Guard have long been whatever is standard with the Swiss Army. Since 1990, that has meant the SIG SG550 rifle. This 5.56mm NATO select-fire rifle has a 20.8-inch barrel and is one of the most accurate and reliable modern combat rifles. Its 30-round clear lexan magazines clip together like ‘jungle mag’ style for rapid exchanges.

The Guard owns both the standard StW90 rifle variant and the SG 552 Commando model (with 8.9-inch barrel, 19.8-inches overall with stock folded). With the Swiss military tradition of marksmanship, it’s guaranteed that these soldiers can use them if needed. 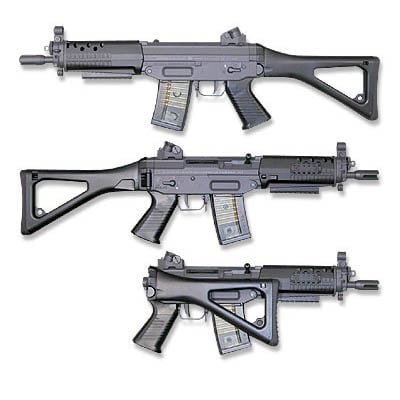 The Sig 552 is standard issue with the Swiss Guards (for when swords alone will not do).

With their long flowing robe-like historic uniform, the Swiss Guard long ago figured out that a short, compact pistol-caliber subgun could be concealed for those times when things go pear shaped. This has made them long-time users of room brooms with Central European origins.

The Swiss made Hispano Suiza MP43-44 is still held in the Vatican armory although more modern guns are used.

The Pal Kiraly-designed SIG MKPO was only 31-inches long but when it was introduced in 1933 and its interesting design almost immediately caught the Vatican military’s eyes. Although not adopted by the Swiss Army, the Pope’s guard bought several. The fact that this series of 9mm submachine gun could fire 900 rounds per minute and its 30-round magazine folded alongside the bottom of the stock for easy concealment (say, under a big balloon uniform) made it an obvious choice. In fact, the Guard is about the only known user of this forgotten gun. 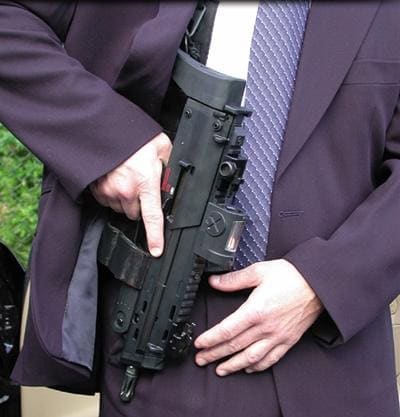 Besides the unique MKPO, the Swiss Guard also acquired quantities of the 9mm Hispano Suiza MP43/44 subgun after World War 2. The MP43/44 is itself a better-made Swiss copy of the Finnish Suomi M31 submachine gun. In the 1970s, these guns were augmented by HK MP5s from West Germany, one of the first instances of the Guard using non-Swiss made guns.  Today the Guard now carries the ultra-modern HK MP7 PDW chambered in 4.6×30mm. This is a good choice as these same types are used by US Navy Seals, German GSG9 and just about anyone who doesn’t agree with Jerry Tsai.

Still, even though the Swiss Guard has access to the best HK burp guns doesn’t mean they threw their old stuff away. Recent pictures from inside their armory show no less than 52 beautiful Hispano Suiza MP43/44s, and a rack of super sweet little SIG MKPOs. You can be sure that if the Vatican is ever invaded these well-maintained old warriors are oiled and ready to go. Just add ammo. 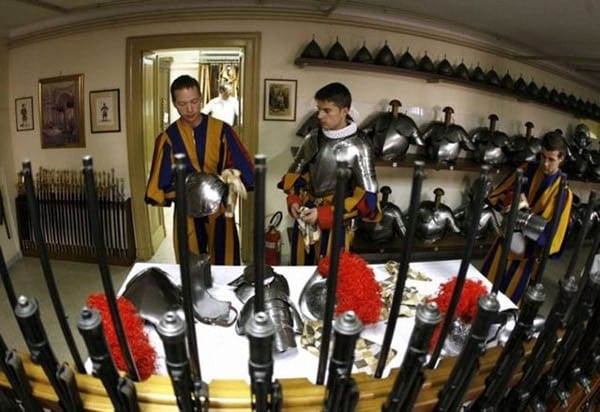 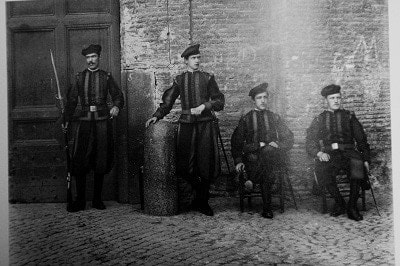 1870s Swiss Guard with the then new Vetterli rifle.

Speaking of the Swiss Guards Armory, it is a functional time capsule of Swiss weapons development. Inside the secure location deep within the Vatican are racks of Model 1871 Vetterli Rifles (with their extremely collectable Yataghan-style short-sword bayonets), opposite racks of Swiss T59 rifled muskets with socket bayonets. These guns mingle freely with SIG 510 and 550 assault rifles and lounge among 15th century edged weapons. Items in the armory are marked ‘AG’, which means “Ausrustung der Garde,” or “Equipment of the Guard/Guard Property” but have never been sold as surplus, making any Swiss-made firearm so marked a subject of a very interesting conversation. 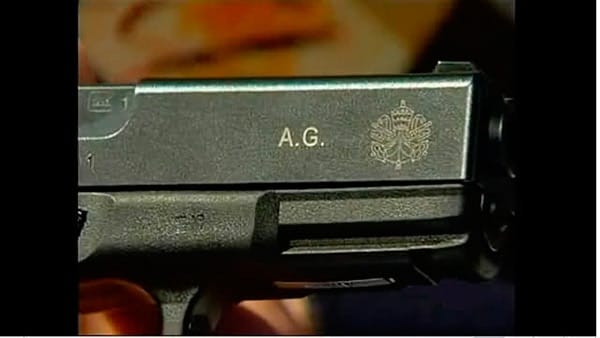 Guns of the Swiss Guard like this Glock 19 are well marked with Vatican insignias. 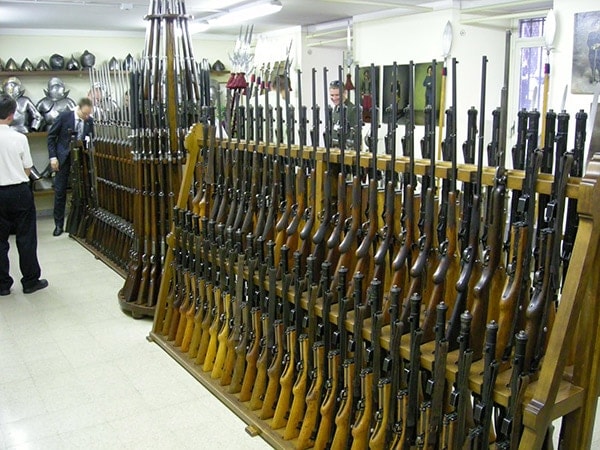 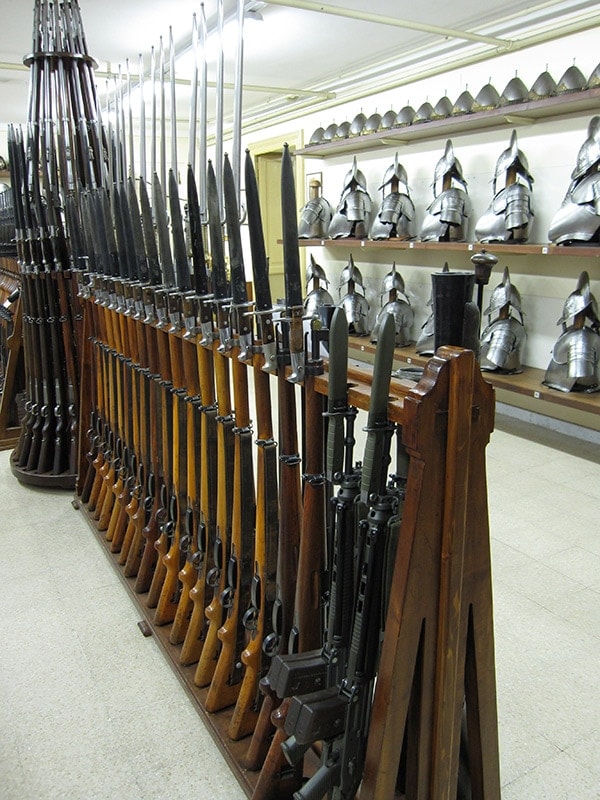 … on the same rack as SIG SG 550s with double magazines, alongside.. 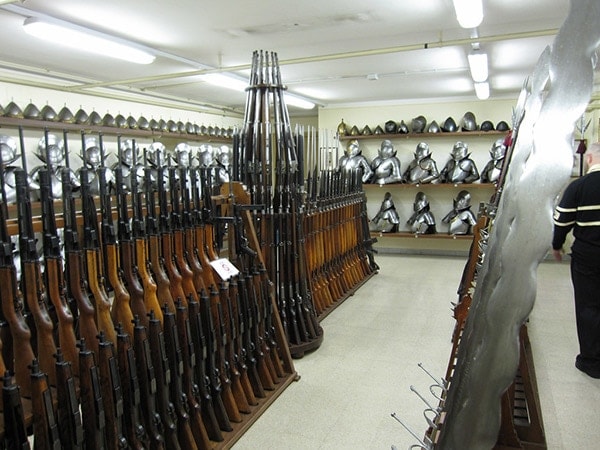 … a nearly forgotten MKPO subguns (bottom left) and a couple of MP43-44s (top left). O, and also note the two-handed swords to the right. 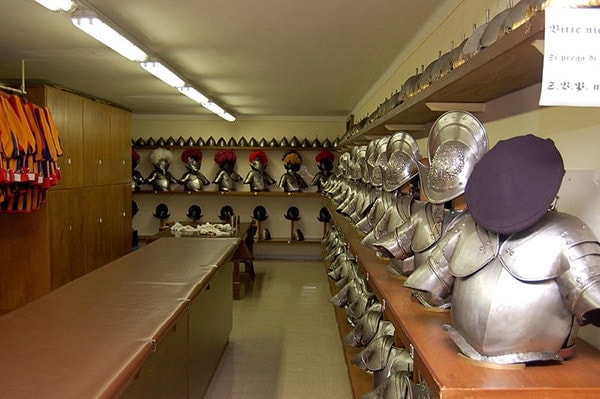 Then there are rooms with many sets of actual armor… 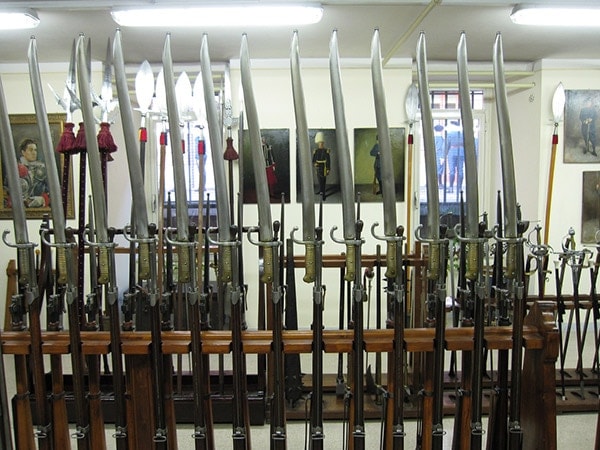 While not generally open to the public, the arsenal has allowed tours by carefully vetted collectors and visiting international clergy with an interest in weapons. A mockup of the room even appeared in the Tom Hanks film Angels and Demons.

A mock up of the Swiss Guard armory appears in the film Angels and Demons.

Woe is the military force that would chose to invade the Vatican. Suffice it to say, if the Swiss Guard ever has that clearance sale, we want to get in line.