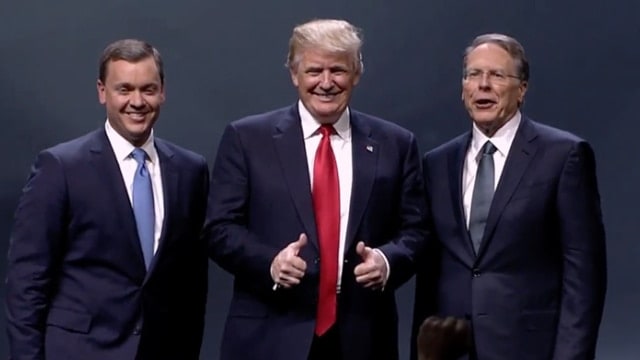 Trump’s appearance at the show will mark the first time a sitting president has appeared at the event since Ronald Reagan.

The NRA was one of the few mainstream organizations to endorse Trump for president. The group’s leaders named Trump over other Republican candidates during primary elections at last year’s meeting. The group would go on to spend more than $30 million last year supporting the billionaire businessman’s campaign.

The NRA maintained that its support for Trump was to preserve the Supreme Court seat vacated by the late conservative Justice Antonin Scalia. Since, the NRA has taken some credit for the Senate confirming Scalia’s replacement, Judge Neil Gorsuch. Both Trump and the NRA supported Republican senators loosening Senate rules — the so-called “nuclear option” — to push Gorsuch through the process.

Since November’s victory, the NRA has been a staunch Trump supporter even though his administration has been rife with controversy and contention with political opponents, allies and bureaucrats. Trump has kept gun groups close. He met with NRA leadership shortly after moving into the White House.

At last year’s NRA convention, Trump vowed to abolish gun-free zones. Yet, this year there’s been growing support in Congress for measures that would allow for national carry reciprocity and silencer deregulation.

Trump will appear alongside other political leaders and speakers at the organization’s Leadership Forum on April 27 during the NRA convention in Atlanta.