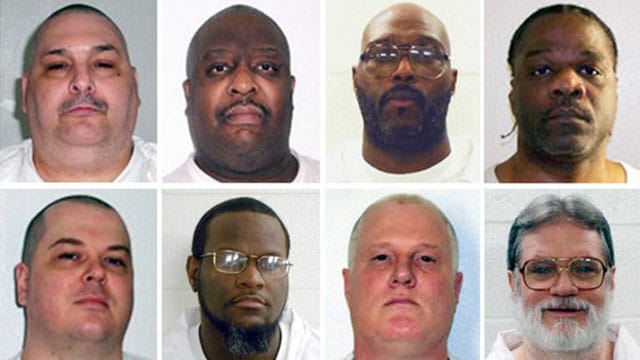 Amid a weekend of controversy and legal battles, the state of Arkansas appears to be preparing for two executions Monday evening, days after a federal judge stayed the executions of all eight men previously scheduled to be put to death over the next 11 days.

The state’s supreme court stayed one execution Friday, citing the mental capacity of the inmate, who was supposed to be put to death at 7 p.m. Monday. Less than 24 hours after the stay was issued, U.S. District Judge Kristine Baker temporarily halted the executions of the remaining seven death row inmates.

But following Baker’s decision, State Attorney General Leslie Rutledge filed a response noting the inmates have all had adequate time – and already exhausted – the legal means to challenge not only their convictions and sentences but their method of execution as well.

“Their guilt is beyond dispute, and Arkansas is entitled to see that their victims receive justice decades after appellees’ horrific crimes,” Rutledge said.

Rutledge’s opinion is shared by Arkansas Gov. Asa Hutchinson, who scheduled the lethal injections and previously displayed confidence in the planned back-to-back executions, as well as the injection protocol, which has faced its own set of controversies.

All eight of the inmates have been convicted of murder, and most have spent more than two decades on death row. In fact, the last sentence was handed down in 2000.

The state’s last execution was carried out more than 12 years ago, but in the more than 40 years since the death penalty has been reinstated, no state has ever attempted to carry out so many executions in such a short time. The rush comes as one of the drugs used in the lethal injection protocol – midazolam – will expire at the end of April and nationwide supplies of the drug continue to dwindle.

The drug, one of three in the lethal injection protocol, is supposed to be used as a means to help inmates not feel pain during the execution. However, the drug has also been shrouded in its own set of controversies, as it has been used in a number of “botched” executions that left death row inmates with anything but a quick and painless death.

In the 101-page ruling, Baker called the rush for executions both reckless and unconstitutional, while the inmates’ legal teams agreed. The Eighth Amendment guarantees that no person – even an individual sentenced to death – will receive a punishment that is deemed cruel and unusual.

“The unnecessarily compressed execution schedule using the risky drug midazolam denies prisoners their right to be free from the risk of torture,” John Williams, an attorney representing one of the death row inmates, said in a statement.

In addition, on Friday, Arkansas Circuit Court Judge Wendell Griffen, issued an order blocking the use of vecuronium bromide, a drug which paralyzes the lungs, alongside potassium chloride, which stops the heart. The order came following a petition from pharmaceutical company McKesson Medical-Surgical Inc., which claimed they were essentially tricked into selling the drug to the state. The company objects to the drug being used in lethal injections.

Likewise, Fresenius Kabi USA and West-Ward Pharmaceuticals Corp., makers of midazolam and potassium chloride, object to those drugs being used in executions, as well.

A hearing, which will be attended by all eight legal teams and others, is scheduled for Monday, where Baker said she will address continuing concerns.

The first execution is scheduled for 7 p.m. Monday, with the second planned for 8:15 p.m.