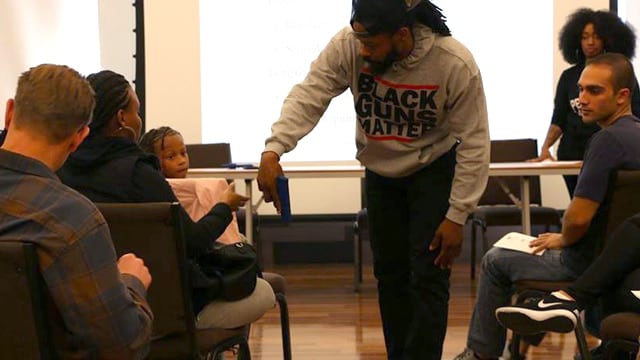 Maj Toure, center, shows one of the Black Guns Matter attendees how to hold a pistol, with a finger straight and off the trigger, during the Chicago event on Oct. 8. (Photo: Jeannine Cook)

Black Guns Matter will expand its outreach program to all 50 states, hoping to fill the gap between firearms education and the inner city communities so often left out of the conversation, group founder Maj Toure told Guns.com Monday.

Toure, a Philadelphia native and card-carrying member of the National Rifle Association, has made headlines over the last year for his group’s mission to provide free gun safety and training to the neighborhoods most impacted by violent crime — including Baltimore, Chicago, Detroit and Atlanta.

Initially conceptualized as a 13-city tour, Toure said Monday he quickly realized the appetite for his message nationwide. With almost $40,000 in donations pouring into the BGM Go Fund Me campaign, it appears others agree.

Guns.com attended one of Toure’s events in Chicago last year, where the conversation turned to how exercising the Second Amendment right can present added challenges when interacting with police.

“Now I wasn’t in that car — I wasn’t — but in my mind, if (Castile) made a furtive move and that officer is jumpy — they are jumpy — I want to go home. I’d rather be right and alive. We got to make sure we’re also tying that within the cultural context, too,” Toure told a classroom of nearly three dozen when discussing the case of Philando Castile, a Minnesota concealed carry permit holder shot to death by police while reaching for his wallet. “That part is very important. It ensures the officer has perception of control over the situation because your actions actually have control over it.”

Toure told Guns.com Monday as he’s traveled the country, he’s endured criticism from other pro-gun groups over his personal life and experience as a firearms trainer.

“We’ve had a year of straight good press,” he said. “The hate is coming lately from, ironically, other Second Amendment groups … I’m starting to recognize the speed and the depth of what we are doing, so as soon as anyone says something negative … I know I’m past the point of being overlooked.”

“It’s growing. It’s a good thing,” he added. “When you are the face of something, that’s what people are going to take shots at.”

He said other gun groups don’t reach out to minority communities effectively, either, making the mission of Black Guns Matter all that more important.

“Gun control groups don’t attack us because you can’t argue with education,” he said.

Black Guns Matter heads to Phoenix on May 5 in an event sponsored by Gun Freedom Radio and AZFirearms.com.

“The Second Amendment is color blind, and the human right to self-defense is meant for all people,” he said in a press release Monday. “Including oft-forgotten individuals of urban communities.”