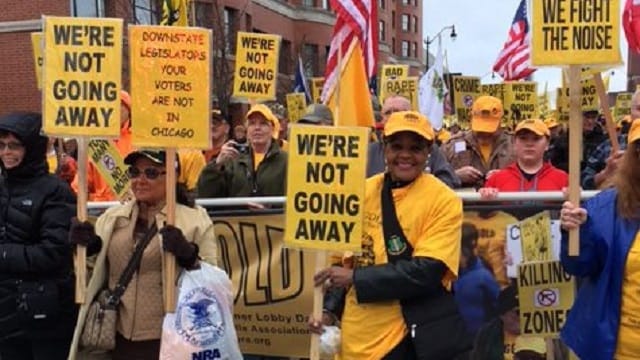 Chicago gun rights activist and ex-probation officer Alfreda Keith Keller is teaching her fellow Chicagoans about responsible gun ownership in a city known for its problems with gun violence.

For a recent Chicago Sun-Times opinion piece, columnist Laura Washington met up with Keller to discuss her history with guns and to better understand her mission in the troubled Windy City.

Washington, a self-proclaimed harsh critic of “The People of the Gun,” was pleasantly surprised when she met Keller, who immediately contradicted many of the stereotypes the columnist previously harbored for gun enthusiasts.

“Alfreda Keith Keller did not fit my cynical view of a gun lover,” Washington wrote. “She doesn’t wear horns. She doesn’t drive a pickup truck.”

Keller — a 63-year-old African American woman, retired Cook County juvenile probation officer, and proud certified instructor of concealed carry classes — said her love for guns started in her childhood. Her father, a military man, would often take Keller to the state fair and teach her proper shooting techniques at the shooting arcade.

“He kinda guided me in techniques,” Keller recalled. “I didn’t realize he was kind of preparing me then, for guns later on.”

Keller took self-defense classes in 2005 as she was eyeing retirement, and then moved on to obtain a gun permit and teach herself concealed carry laws. Eventually, Keller qualified as a firearms instructor and hasn’t looked back since.

Keller now teaches many other black women about safe gun ownership, some of whom have inherited firearms from their husbands or fathers.

“A lot of women are fearful,” Keller said. “They’re fearful of like, now, the shootings on the Dan Ryan. Of being in the car, going out.”

When asked about all the gun violence in Chicago and whether stricter gun regulations were needed, Keller said that people taking concealed carry classes are not the ones running around and murdering others on the streets.

“They don’t run around shooting up people, but it’s the gang-bangers, it’s the people who aren’t versed in firearm safety.”

Washington got in touch with Keller through Chicago Guns Matter, an African American pro-gun organization that strives to teach the urban community about its Second Amendment rights. Keller and the group are making it known in Chicago that guns are not only for criminals set on harming others.

“We have doctors, lawyers, eye doctors, all kinds of professional people that have been shooting for years,” Keller said. “Who now are embracing the fact that they can conceal carry. And that they maybe can reduce the bad actions that happen in their neighborhoods.”